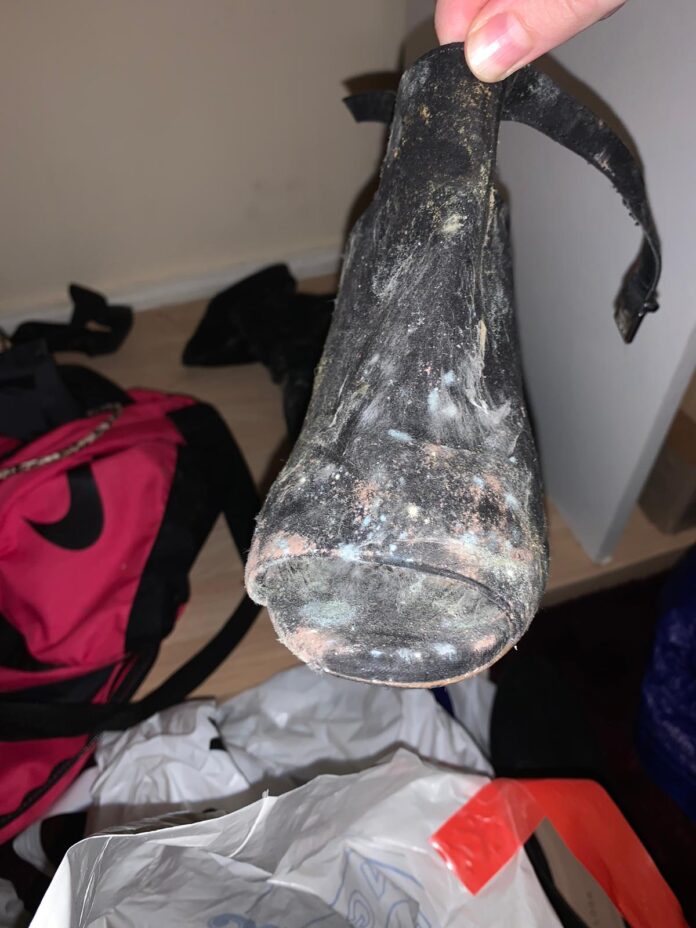 Yesterday evening, over 25 ACORN members marched on the business address of Zear Property who left university student Kelsey in squalid living conditions so bad that she was forced to move cross-country back to her hometown in the middle of the pandemic.

In September 2020, Kelsey moved into rented accommodation let by Zear Property, to find mould sprouting within just five days of moving in. Kelsey reports that she promptly provided evidence of the mould after property manager, Konstantinos, directed her to monitor a patch of powdery paint above her bed. Since then, Kelsey states that he has simultaneously acknowledged and denied the problem, and refused to take any responsibility for it.

Forced to manage the problem herself, Kelsey invested in a dehumidifier and even tackled the mould directly with bleach spray, to no avail. In contrast, Konstantinos failed to take appropriate and effective measures, which meant the problem spread – leaving Kelsey to foot the bill for dry cleaning after her clothes and shoes became riddled with mould.

With the pandemic spreading and the months passing by, the risks to Kelsey’s physical health became a safety hazard – she had no choice but to leave her accommodation and move back to Devon. The dire living situation followed by impromptu travel placed Kelsey at enhanced risk during the national lockdown, which could have easily been avoided.

Kelsey’s problem with severe mould is far from an isolated case: according to The Tenant’s Voice, one third of tenants struggle with mould in rented accommodation.

That’s why, following months of inaction from Zear Property who repeatedly failed to deal with the mould in Kelsey’s room, ACORN have stepped in to support their member. On Saturday 3rd April, over two dozen ACORN members staged a socially distanced protest outside the business and home address of property director Konstantinos in Rusholme to confront him about his incompetence and disregard for the wellbeing of his tenant.

Kelsey’s demands are simple: a reimbursement for cleaning costs and property damage, and a rent rebate in compensation for her detrimental housing experience. Kelsey will provide her testimony via video link during Saturday’s march.

Kelsey said, “My experience with Zear Property has been appalling. Their director, Konstantinos, has shown a continuous and complete disregard for my rights as a tenant and took absolutely no accountability for his negligence during my tenancy in one of his properties.”

“Despite my thorough emails complete with full evidence of every claim, the only formal response I’ve received about dealing with the mould is an unhelpful email from Konstantinos, shirking all responsibility – even though I have evidence of him confirming damp in the property from the date I moved in.”

“Joining ACORN has provided me with vital support through a really draining experience and has given me opportunity to help others facing similar issues.”

ACORN Manchester branch spokesperson Chelsea added: “As a union we have attempted to contact Konstantinos and our demands have been ignored.”

“Kelsey’s case is far from unique. At ACORN, we hear stories like this every day.”

“It’s deeply unfair that tenants pay a substantial part of their income every month on housing that is often poor quality or dangerous. Many tenants fear that if they speak out, they will be served a Section 21 ‘no-fault’ eviction notice, still legal under UK law.”

“At ACORN, we know that when we are alone, people in positions of power over our lives can do what they want. When we come together and use our strength in numbers, we can make sure that the rich and powerful listen to us and treat us properly. Over the past year alone, we’ve won over £20,000 of compensation for tenants left in poor quality housing and waiting for vital repairs to be done.”