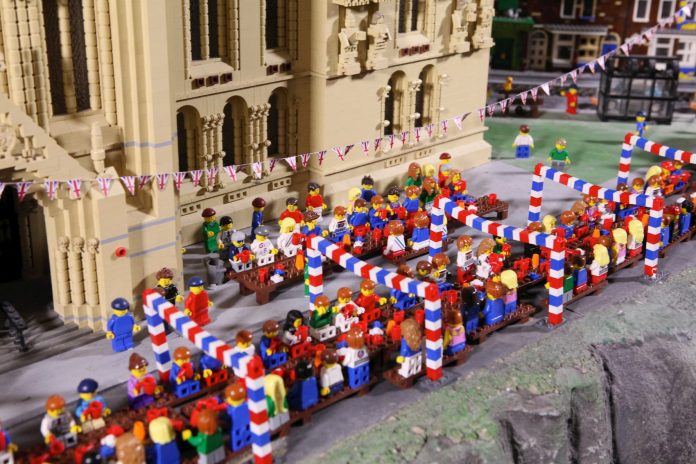 Legoland Manchester is honouring Meghan Markle and Prince Harry’s May 19 nuptials in its own way: with a ‘Royal Block Party!’ Lego mini land build, that launches today.

The creative and playful scene, open from Monday 14th to Monday 21st May, pays tribute to the upcoming wedding of the year in the heart of the Barton Square based family attraction, ‘Mini Land’.

What’s more, couples named Meghan and Harry on Saturday 19th May will gain free entry to both Legoland Discovery Centre Manchester and Sea Life Manchester in celebration of the royal wedding and two families coming together.

Proportionately perfect, the mini Royal Block Party shows Manchester’s love for the new Royal couple-to-be by including Manchester landmarks such as the Town Hall, Central Library and Piccadilly Train Station.

The Royal Block Party build contains over 15,583 bricks, each laid by hand and glued into place by Alex Bidolak Master Model Builder, and sees  85 Lego minifigure characters taking to the streets to celebrate Meghan and Harry tying the knot.

“We know that young children understand the world around them through purposeful play, and what better way to pay tribute to the Royal Wedding than creating a street party role-play scene for our young visitors to enjoy” said Jenn McDonough, General Manager Manchester Cluster, Merlin Entertainments.

The Royal Block Party play scene is included within the general admissions price, alongside the newly launched Space Mission feature.

For further news on the attractions or to book your tickets please visit: