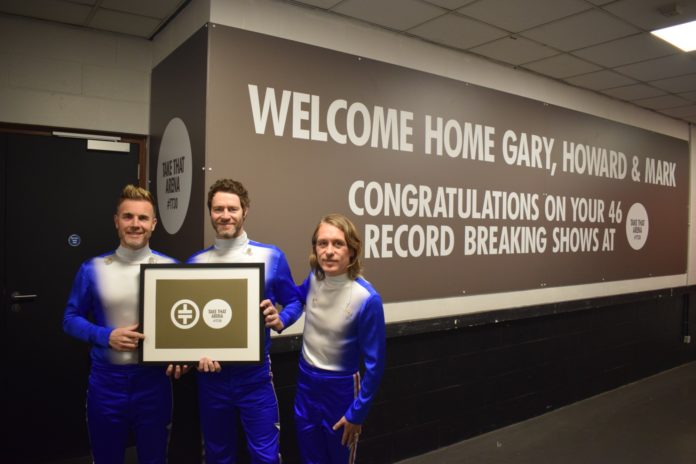 This Saturday marks Take That’s record-breaking 46thperformance at Manchester Arena – the most by any music act in the venue’s history.

In honour of their homecoming tour, the arena has been renamed the Take That Arena for one week only to coincide with the duration of their 5 show residency.

As a memento to celebrate the achievement and their exclusive naming rights accolade, General Manager, James Allen presented each band member with a framed Take That Arena logo keepsake.

General Manager, James Allen commented: “Take That have been with us from the start and as they graced our stage for their homecoming, it is fitting that they performed at the Take That Arena. The rebrand is our way of marking the band’s record breaking achievement of 46 performances here, an accolade that is truly deserving of this recognition, a show of pride from their venue at the heart of Manchester.”

Take That commented: “It’s been such an honour for us to have our home town arena re-named as The Take That Arena this week and we’re so proud to have broken the record for playing the most live shows here!  This tour, marking our 30th anniversary is incredibly special for us and we’re so grateful for the love and support from all the fans who have come to see us on the tour so far.”

2019 marks Take That’s 30th Anniversary and to coincide with this milestone, they released ‘Odyssey’ a re-imagined greatest hits album that takes the listener on a journey through the incredible musical history of one of the UK’s most successful bands of all time.

Levellers added to Castlefield’s Sounds of the City