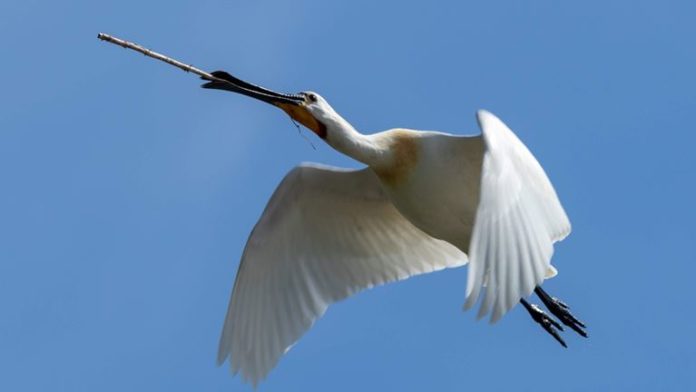 RSPB nature reserve staff and guests alike have been left “astonished” by feathery visitors from the Mediterranean who have been spotted carrying nesting materials.

The RSPB Burton Mere Wetlands, nestled between Liverpool and Chester, is well-known for its grey heron and little egret breeding colonies but this year the more regular varieties of heron have been joined by their exotic relatives- a pair each of spoonbills, cattle egrets and white egrets.

These rare birds are all showing positive signs of breeding, having been seen carrying nesting material into the heron colony. If they are successful, it will only be the second time that cattle egrets have bred at the site and a first for both spoonbills and great white egrets.

“The grey herons nest here each year, but little egrets only colonised the UK in the late 1980s and have been breeding here since 2005.

“For them to now be joined by the much rarer cattle egrets, great white egrets and spoonbills is even more astonishing.

“They’re usually more at home breeding in the Mediterranean, so we’ve been dubbed the ‘Costa del Dee’ by some visitors, who are enjoying seeing the birds from a special watchpoint that we have created to allow for better views.

“If the birds all breed it will be extraordinary and cause for additional celebration in our anniversary year.”

Government has “no plan” for achieving Net Zero, two years after setting target in...

A perfect time to bring Gaia to Rochdale-Planet earth replica hailed a success for...