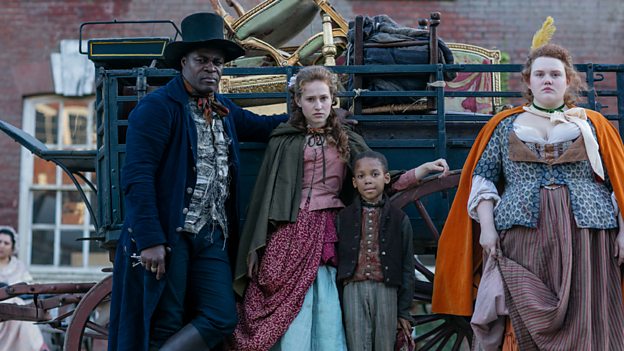 Set in 18th century Georgian London, the most cosmopolitan place on Earth, Harlots follows brothel owner Margaret Wells (Samantha Morton) and her family as they struggle to move upwards in the world.

When her business comes under attack from Lydia Quigley (Lesley Manville), a rival madam with a ruthless streak, Margaret must fight back, even if it means putting her family at risk.

At a time where one in five women in London is making her living selling sex, Margaret’s daughter Charlotte (Jessica Brown Findlay) who is London’s most coveted courtesan, begins to grapple with her position in both society and her immediate family.

“Harlots was born of friendship and it has been a labour of love. Our desire was to write an epic story, where a large cast of women drove the action.” say Moira Buffini and Alison Newman, co-creators of Harlots

Harris’s List of Covent Garden Ladies was a Georgian bestseller, a yearly publication describing, in very fine language, the services of London’s prostitutes, from high-class courtesans to those who solicited in seedy bars and taverns. This gentleman’s guide to whoring led us to a Georgian outlaw society, where some of these women had found a way to turn the economy of exploitation around and use it for their own benefit.

We knew instantly that we wanted to create a drama about these women, from their point of view. The more time we spent with the Georgians, the more we fell in love with them. We found them to be funny, bold and outrageous, full of wit and irreverence. It was easy to become seduced by them and their world. We took our idea to Alison Owen (and later Debra Hayward) who loved our take on a family drama involving mothers and daughters and two warring brothels.

We continued to read. We found out about the courtesans: the wonderful Sally Salisbury, Fanny Murray, Charlotte Hayes, Kitty Fisher, Lucy Cooper. We read about the bawds: Mother Needham, Mrs Goadby, Elizabeth Gould, Mother Douglas. We read about the law courts, coffee houses, theatres, the slave trade, drink and drugs, millinery, music and molly boys. We read inspiring primary source material: Boswell’s London Journal, Nocturnal Revels (outrageous whorehouse gossip and anecdotes of the time), confessions and statements from the Old Bailey’s archive. We even read the ‘Apology’ of Teresa Phillips, an enterprising woman who ran a sex shop on Bedford Street.

We drew on the London Library’s amazing resources and spent long hours in the rare books section of the British Library. So we amateurs began to build up a picture of Georgian London – and we were there with a purpose, right from the word go. We wanted to look closely at a profession that hasn’t changed in hundreds of years.

We wanted to create a drama in which sex workers would recognise themselves; a drama in which we imagined what it was like to lead such a life, in a different time. It’s always been the coal-face of gender politics and that’s where we wanted to put our female gaze. Our characters have a contemporary edge. It’s a costume drama with its teeth sunk firmly in the modern world.

We decided very early on not to use any historical characters. Our show is about a timeless economy and about Everywoman’s instinct to survive. Our tone was important too. The Georgians were neither worthy nor miserable, we knew our drama would have humour. We were joined by Jane English, Cat Jones and Debbie O’Malley in the writers’ room and, in that occasionally raucous atmosphere, our harlots continued to develop an integrity all of their own.

They have been given breath and life by a truly exceptional cast.

An enviable production team was assembled, led by our first block director, Coky Giedroyc, who then passed the baton on to China Moo-Young and Jill Robertson. We took over a crumbling Georgian manor house near Watford. It gave us our production base and afforded us almost all of our interiors – the magistrates court, the coffee house, the gambling club – as well as all three of our brothels. We built Covent Garden’s courtyards and alleys at the back, and Georgian Soho at the front. We spent many days shooting on location in London too.

We were used to working with female producers, directors, writers and actors. It felt completely normal and natural. It was only when one of our male actors pointed out that in his entire career he’d never been on a set quite like it, that it occurred to us how unusual Harlots is.

We are very thankful to all of our colleagues and collaborators. They have ensured that our beloved harlots have made their way to the screen in a truly vivid and arresting way.”

Two homes built in a day at Manchester Central