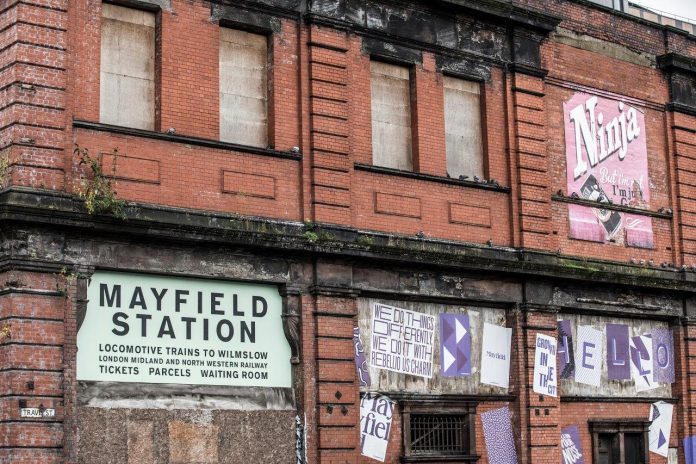 The Mayfield Partnership, with help from its social media followers, has restored and reinstated an original wooden name sign on the disused Mayfield Railway Station building in Manchester City Centre.

Overlooking the Travis Street elevation of the station, the sign came to the developer’s attention while work was being carried out on the building earlier this summer. It was immediately decided that it should be restored and re-painted with the original wording.

Unfortunately, being left open to the elements for decades, the lettering had become illegible which led the partnership to seek the help of its social media followers.

James Heather, U+I’s Development Director, explains how the mystery was solved. He said: “Some of the words were easy to identify but we were stumped as to the content of the whole sign and there was no record anywhere of how it originally read.

“We had a number of suggestions including input from the London, Midland and Scottish Railway Historical Society but nobody could tell us with any authority what the sign said.

“We were then contacted by as local resident who had done some detective work and some software image manipulation. Using this method, he was able to provide the wording which we agreed was the original. From this we were able to create the new sign and have now re-installed it.

“It looks great on the building and for such a historic site, it is very pleasing that we are able to bring a little bit of the past to life.”

The sign was re-created by Marple-based sign writer Damian Whyatt who has been a signwriter for 27 years. Damian, whose work has featured in a number of TV dramas and Hollywood movies, said: “Before vinyl graphics were invented, the vast majority of signs would have been hand-painted. In the 1950s and 60s. There would have been hundreds of people up and down the country painting everything from shop fronts to commercial vehicles and pubs.
“In recent years there has definitely been a revival of hand-painted signwriting and it’s quite trendy at the moment. It’s great to be involved in a project like Mayfield and re-create something which thousands of people will see every day.”
The station originally opened in 1910 to provide extra capacity to Piccadilly Station before closing in the early 1960s. It was then used as a parcel depot before finally closing in 1984. It has remained disused ever since.

Now, the Mayfield Partnership – a joint venture between Manchester City Council, LCR, Transport for Greater Manchester and mixed-use property regeneration specialist U+I – is bringing forward plans to regenerate the area while retaining the best of the existing architectural and natural heritage.

The Partnership’s long-term plan for Mayfield is to create an iconic, £850m mixed-use community over the next 10 years, including commercial, residential and leisure facilities. The 24-acre site, next to Piccadilly Station, has been derelict for over a decade.

The long-term proposals will seek to enhance many of the site’s historic features including developing and improving the River Medlock, which flows through the site. The intention is to maintain the historic buildings on the site and make the most of the area’s built heritage.