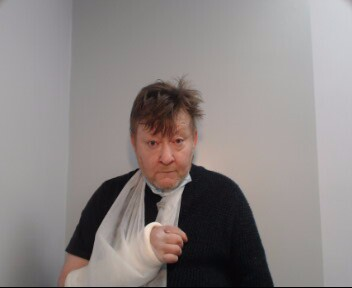 A man who attempted to take staff hostage in a medical centre in Woodley and swung a meat cleaver at a woman has been jailed.

Michael Brannigan aged 50, from Stockport, has today been sentenced to over three years imprisonment after pleading guilty to four counts of possession of an offensive weapon, robbery, criminal damage, assault by beating and affray.

Brannigan had pulled up alongside a car on Oldham Drive in Woodley and signalled for the driver of the vehicle to put his window down. As he did so, Brannigan poked a walking stick through the window and struck the driver across the face. Brannigan then proceeded to kick at the vehicle and began to wave a knife that had fallen from his pocket at the occupants of the car.

Ten minutes later police received a further call from a chemist on Woodley Precinct, Stockport claiming a man – Brannigan – had demanded they hand over medication to him after threatening them with a knife.

Four minutes later police received another call from Woodley Health Centre stating Brannigan was threatening staff with a knife and smashing windows inside the surgery. During the disturbance staff members barricaded themselves into offices as Brannigan continually banged on the door with his walking stick.

Whilst continue to scream and shout he pulled out a kitchen knife from his bag before picking up an office chair and smashing a window inside the surgery. He then declared he was taking one member of staff hostage and allowed all the others in the surgery to leave saying “If I see you again, I’m coming for you”.

Before staff were able to intervene and secure Brannigan in the waiting room he attempted to swing a meat cleaver at another member of staff, thankfully without making contact.

Police swiftly arrived and as an officer approached she could see Brannigan holding a metal pole with a weighted based, which he refused to put down. He then subsequently lunged at the attending officers but was quickly detained on the floor.

As he was restrained two knives fell from his back pockets and onto the floor.

Detective Constable Stephen Rothery of GMP’s Stockport CID district, said: “Firstly I want to commend the actions of the officers who first attended the scene as their swift actions were instrumental in ensuring Brannigan was unable to terrorise or worse injure any people in his path.

“Brannigan wreaked havoc in a very short space of time and threatened multiple people with knives, not sparing a thought for the fear or distress that this could cause them. When he was arrested he was found to be carrying multiple knives so who knows what further damage or injury he could have caused to others if he hadn’t been apprehended.