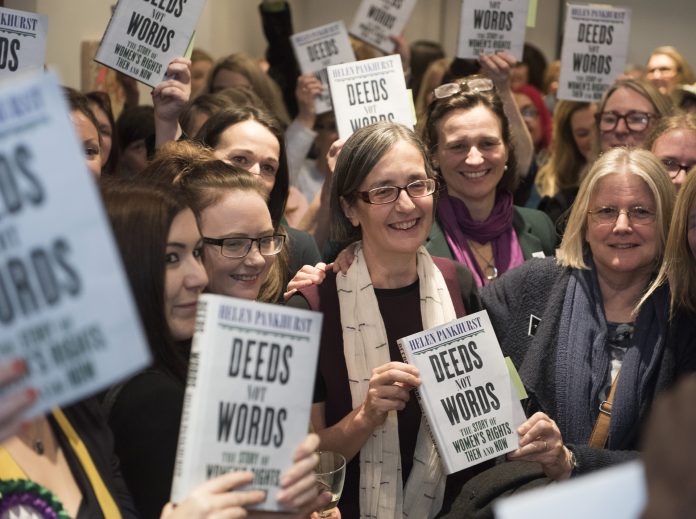 The Pankhurst Centre marked the centenary of the Representation of the People Act on 6 February 2018 with a day that reflected the historical significance of the occasion with a visit from Prime Minister Theresa May.

That 100 years later it should be a female Prime Minister visiting the former home of Emmeline Pankhurst and the birthplace of the suffragette movement where she was also able to meet Helen Pankhurst, Emmeline Pankhurst’s great grand-daughter, added significantly to the poignancy.

Gail Heath, chief executive of the Pankhurst Trust, said, “On this historic day, when we’ve remembered all those who have fought for women’s equality and continue to do so, it was very fitting that the Prime Minister Theresa May should visit the Pankhurst Centre, the former home of Emmeline Pankhurst and the birthplace of the suffragette movement where she met Helen Pankhurst, Emmeline Pankhurst’s great grand-daughter. We were able to introduce the Prime Minister to some of the wonderful volunteers upon whom we wholly rely to run the small museum at the Pankhurst Centre and to share with her our vision for its future, which we are actively fundraising to achieve. The visit was also an opportunity for the staff and volunteers of Manchester Women’s Aid to advise the Prime Minister about the challenges women are facing on a daily basis.”

Throughout the morning BBC Radio Manchester filled the Pankhurst Centre with the inspirational women who were guests on its show. It also carried the words from its interview with Helen Pankhurst, who talked of violence against women as being their biggest barrier, to the Prime Minister asking her what the government was doing.

The day ended with Helen Pankhurst’s Open House Book Party and a marking of the moment at 8pm when exactly 100 years earlier the legislation was passed giving some women the right to vote with a social media Thunderclap. Millions of people were reached by the #stillmarching campaign that was established to deliver change for women and to say that although there has been progress there is still a long way to go in the UK and around the world.