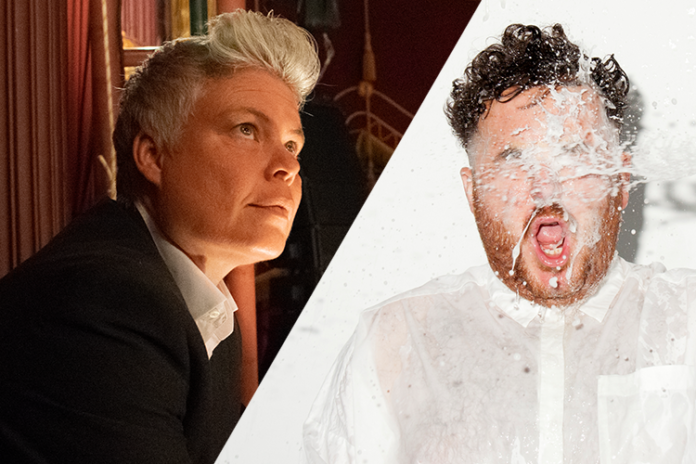 To celebrate Manchester Pride 2020 Manchester International Festival (MIF) has been inviting LGBTQ+ artists to join our weekly Artist Drop-in sessions, which were set up in response to the Covid-19 crisis and provide a space for creatives of all kinds to keep in touch, share experiences and share ideas.

This week’s event, on Thursday 27 August at 2pm, is hosted by two artists widely recognised for their contribution to working class and LGBTQ+ representation in arts and culture: the award-winning poet, playwright and performer Louise Wallwein MBE, and artist, writer and director Scottee. As well as an opportunity to celebrate the contribution of LGBTQ+ and working class artists, it will also be a chance to discuss the challenges that exist, as a result of Covid-19 and more widely.

Other artists this month, in the run up to Pride, have included Lois Weaver – one half of Split Britches, co-founder of Spiderwoman Theatre, WOW, and Artistic Director of Gay Sweatshop – plus Manchester-based British Ghanaian interdisciplinary artist Christian Asare, and one of the UK’s most celebrated drag queens, Cheddar Gorgeous.

Louise Wallwein MBE is a poet, playwright and lyricist. Her work has been performed on shorelines and in the sea, in the streets and on the wing of a Second World War Shackleton aircraft, and in theatres across the UK and internationally. Louise’s work has been produced by BBC Radio 3 and Radio 4, BBC One, Contact, Red Ladder, National Theatre Wales, the Royal Exchange Theatre, Walk the Plank, Battersea Arts Centre, Z-arts, HOME and Manchester Camerata. Louise also works in communities, working with thousands of people to develop their voice. GLUE, her acclaimed, theatre-demolishing one-woman show, is published by Smith|Doorstop.

Scottee is a self-taught artist who makes political performance. He is the co-founder of Scottee & Friends Ltd, a collective of artists, producers and participants working across the UK; an Associate Artist at HOME; one of the founding members of the Working Class Artist Group.

Following this week’s Pride related event, MIF’s next Artist Drop-in on Thursday 3 September features theatre maker Chanje Kunda alongside dancer, choreographer and director Darren Pritchard – representatives respectively for MIF and HOMEon the National Freelance Taskforce, which was set up to strengthen the influence of the self-employed who make up a large and vital part of the performance sector.

Go to mif.co.uk/whats-on to find out more.

Halloween in the City will be returning to Manchester this October with a host...