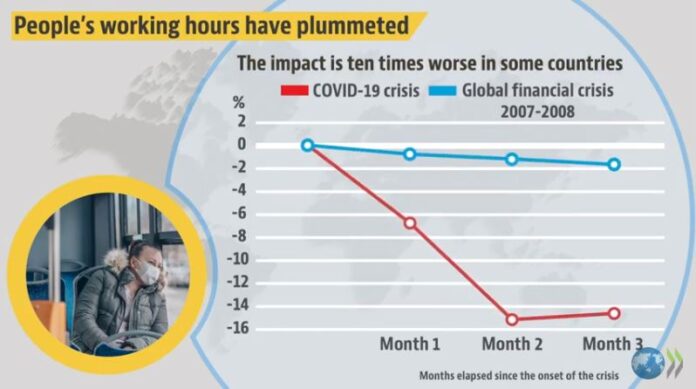 The Covid-19 pandemic is turning into a jobs crisis far worse than the 2008 crisis. Women, young people and workers on low incomes are being hit hardest, according to a new OECD report and unemployment statistics released today.

The OECD unemployment rate edged down to 8.4% in May 2020, after an unprecedented increase of 3.0 percentage points in April, to 8.5%, the highest unemployment rate in a decade. In February 2020, it was at 5.2%. The number of unemployed people in the OECD area stood at 54.5 million in May. The lack of variation between April and May is the result of contrasting trends. On the one hand, in the United States, as the economy started to re-open, many furloughed workers went back to work, even as other temporary layoffs became permanent. On the other hand, unemployment is increasing or risks becoming entrenched in many other countries.

The OECD Employment Outlook 2020 says that, even in the more optimistic scenario for the evolution of the pandemic, the OECD-wide unemployment rate may reach 9.4% in the fourth quarter of 2020, exceeding all the peaks since the Great Depression. Average employment in 2020 is projected to be between 4.1% and 5% lower than in 2019. The share of people in work is expected still to be below pre-crisis levels even at the end of 2021.

Initial public support has been unprecedented in scale and scope, notably through the expansion of job-retention schemes that allow employers to cut the hours their employees normally work while receiving financial support for these unworked hours. Total hours worked have plummeted, falling ten times faster in the first three months of the current crisis than they did in the first three months of the 2008 global financial crisis, in OECD countries for which data are available.

Speaking ahead of a special OECD Roundtable Ministerial Meeting on Inclusion and Employment policies for the Recovery – chaired by Spain’s Minister of Inclusion, Social Security and Migrations, Mr. José Luis Escrivá – OECD Secretary-General Angel Gurría said: “Building on the swift and decisive initial response to the Covid-19 crisis, countries now need to do everything they can to avoid this jobs crisis turning into a full-blown social crisis. Macroeconomic policies must remain supportive through the crisis to minimise the risk of a prolonged slump and a lost generation of young people whose labour market prospects are durably harmed. Meanwhile, reconstructing a better and more resilient labour market is an essential investment in the future of the next generations.”

People on low incomes are paying the highest price. During the lockdown, top-earning workers were on average 50% more likely to work from home than low earners. At the same time, low-income workers were twice as likely to have to stop working completely, compared to their higher-income peers.

Women have been hit harder than men, with many working in the most affected sectors and disproportionately holding precarious jobs. The self-employed and people on temporary or part-time contracts have been particularly exposed to job and income losses. Young people leaving school or university will struggle to find work and face the risk of long-term damage to their earnings potential.

The Outlook provides a series of recommendations for where countries should focus their efforts to help people and firms through the crisis and reduce the long-term impact.

In the short term, continued support for some sectors still affected by containment measures remains vital to protect jobs and well-being. But it is important to target support to those most in need, while fostering the incentives to go back to work safely for those who can and supporting firms hiring new workers. This is vital to avoid the scars of prolonged joblessness and inactivity. Businesses, especially small ones, will need support to implement health and safety practices in the workplace.

As prospects of quickly finding new work will remain poor for many, some countries should extend unemployment benefit durations to prevent jobseekers from sliding too quickly into much less generous minimum income benefits. Emergency support for the self-employed should also be re-assessed to improve targeting, restore incentives and ensure fairness.

In the medium term, countries should address the structural gaps in social protection provisions that the crisis laid bare. This will involve strengthening adequate income support for all workers, including the self-employed, part-time and other non-standard workers. Firms must also repay the trust governments have invested in them during the emergency phase of the COVID-19 crisis by keeping their workers to the extent possible and investing in their skills. To ensure no one is left behind in the recovery, extending support for vocational education and training is crucial, as well as leveraging social dialogue and collective bargaining to enhance the resilience of the labour market.

Manchester to play its part in