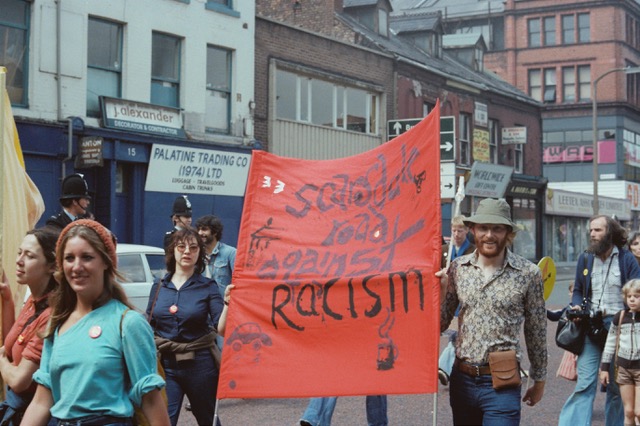 A day that has gone down in both Manchester music legend and one that delivered a powerful blow to a rising scourge of organised racism in the North West; the Northern Carnival Against The Nazis took place on Sat 15 July 1978 with a 15,000-strong rally and huge, open-air concert in Alexandra Park.

Four decades on, the event that brought the seventies’ powerful Rock Against Racism movement to the city and an audience of 40,000 people to watch bands including Buzzcocks, Mick Hucknall’s The Frantic Elevators, Exodus, The Fall and Britain’s leading home-grown reggae band, Steel Pulse, is being marked in a series of events and exhibitions.

Organisers, rally marchers and later generations are being reminded of an influential day of music, activism and camaraderie in the We Are Dynamite! commemorative project, led by Manchester Digital Music Archive (MDMA), opening with a launch event on Sat 14 July 2018 at Manchester Central Library and an exhibition between Mon 3 – Sat 22 September 2018 at NIAMOS. Both physical and online exhibitions will include poster artwork, photographs and memories; with anyone who was there or wishes to contribute on behalf of relatives or friends urged to take part.

Cited by joint organiser, Bernie Wilcox of Rock Against Racism, as ‘the day that it became cool to be anti-racist’, the Northern Carnival Against The Nazis galvanised the city against racist groups including the National Front, with a rally of 15,000 people marching all the way from Strangeways to Alexandra Park, Moss Side, joining a further 25,000 for an afternoon of speeches, music and unity. The organisers, including the then just 22-year old, Wilcox and the Anti-Nazi League’s Geoff Brown had hardly dreamt of such a number. The impact of the event’s promotional activity, in an era long before the internet, had had a profound effect, the result of cutting deals with the city’s flyposting ‘mafia’ and distributing thousands of badges bearing the iconic Rock Against Racism and Anti Nazi League artwork.

Bernie Wilcox remembers: “Everyone wanted to do something to help and we had phone calls every day from activists and people new to politics wanting to lend a hand. In the weeks before things just mushroomed. There was a massive buzz around the city and it seemed like everyone walking down Market Street on a Saturday was wearing at least one and often dozens of Anti-Nazi badges. There were loads of different ones – NF = No Fun, Pogo On A Nazi, Skateboarders Against The Nazis, Gays Against The Nazis and Firemen Against The Nazis and many more.”

The Rock Against Racism story in Manchester began in 1977 as a reaction to Eric Clapton’s shocking, racist rant at a gig in Birmingham when he said: “Get the foreigners out. Get the wogs out. Get the coons out. Keep Britain white.” Rock Against Racism gigs were organised not only in traditionally progressive and student areas but in the Manchester’s council estates in places like Partington, Droylsden, Bury and Stretford (including The Fall’s show at Stretford Civic Hall, immortalised on The Fall: Live 1977 album).

Wilcox and Brown were part of the 3,000 Manchester-based anti-racists who travelled to London in April ‘78 for the first Anti-Nazi Carnival, joining 80,000 others enjoying an all-star line-up of The Clash, X-Ray Spex and Tom Robinson taking on racism at Victoria Park, London. Brown and Wilcox sat together on the train home and agreed that they just had to organise a similar event in Manchester. It took just ten weeks for a small army of volunteers to pull plans together, convincing Manchester City Council, bands, promoters and sympathetic groups to dig in and help head off the threat of racism.

Geoff Brown recalls: “There was a lot to do in preparation. People were busy making banners, placards and badges as well as booking coaches and selling tickets. Manchester Polytechnic students stapled thousands of sticks of plywood to make the lollipop placards by which the Anti-Nazi League became instantly recognisable. Flatbed lorries were borrowed and diesel generators hired to put on the back, powering the amps of the bands that played throughout the rally. People had to get up at six in the morning on the day of the carnival to get to Strangeways and persuade people not to park their cars there.”

Eventually playing the concert on the date their Top 40 single ‘Love You More’ was released, Buzzcocks had only confirmed after Wilcox bumped into singer, Pete Shelley, one afternoon on Oxford Road, asking him to commit, which he did on the spot. Although a household name, Buzzcocks insisted that the reggae band, Steel Pulse headlined the gig, with Lancaster’s China Street (a white reggae act with a track: Rock Against Racism) opening a gig that had purposely set punk and reggae bands side-by-side. A flood of bands wanting to play, including The Fall, meant that additional Rock Against Racism gigs were held in city venues during carnival week, yet it was the outdoor show that gained local and national attention and was seen to make concrete the national music press’ support for the anti-fascism movement.

Paul Morley reviewed the carnival for the NME, writing: “Everything was respectable. Everyone grooved on fun, not fear. The stand was made. And because politicians will never understand the full significance of rock ‘n’ roll we needn’t worry (yet). ‘This wasn’t politics,’ said Pete Shelley, ‘it was fun. But the best kind of fun is with people, and being with people is politics.’”

Amongst the speakers at the rally was Ramila Patel, then a 21-year-old from neighbouring Bolton. Like many other Asian youths facing the multiple threats of advancing racist groups like the National Front and growing unemployment, Ramila became involved with the Anti Nazi League and helped to form a Rock Against Racism club in Bolton. She was chosen to speak at the rally by Geoff Brown because of her defiant solo march in front of Martin Webster, the National Front leader, on the streets of Hyde, Tameside in October 1977. Parallel to racist events unfolding on the streets, Strangeways Prison in Manchester had a notorious reputation for employing prison warders who were members of the National Front, therefore the Anti Nazi League planned to begin the Northern Carnival against Racism outside Strangeways Prison.

Recalling her address to the carnival crowd of 15, 000 at Strangeways, she says: “It was very moving to see the massive crowd in front of me who were there to oppose the National Front. We were united by our love of music and hatred for racism. At the end of the rally we danced to the music blasting from the trucks in front of us all the way to Alexandra Park. Waving our Anti Nazi League lollipops, the journey from Strangeways to the Carnival was memorable. I will never forget the thunderous welcome from the huge crowd that had gathered in Alexandra Park. It was an emotional moment and I felt an acute sense of solidarity with the crowd.”

Bringing music and politics together in such urgent need, embracing the aesthetics and spirit of the punk movement and fostering support across generations, the Northern Carnival Against The Nazis is widely seen, by organisers, attendees and historians, as having had a long-lasting influence on attitudes towards diversity and race in the city and beyond.

Abigail Ward of MDMArchive says: “Looking back at the events of 1978, it was clear that the National Front was gaining ground in Manchester, and a climate of racial intolerance prevailed across the UK. Initiatives like Rock Against Racism and the Anti Nazi League were pivotal in establishing anti-racism in our city and beyond. Celebrating the 40th anniversary of the carnival at Alexandra Park, we can mark an event that has lived long in the memory of those who organised and attended the gig and rally, whilst considering a new era of challenge for people opposing messages of racism and division.”

Manchester Digital Music Archive was established in 2003 to celebrate Greater Manchester music and its social history and has 2,953 active users, uploading artefacts from their personal collections. A relaunch of the site in 2017, including updates to allow easier and more instantaneous smart phone uploads, has gone ahead to encourage the 30% female base of users to share more items as well as offering a potential solution to an evident shortfall in the number and range of uploads relating to the region’s current and historic LGBT+ music culture.

We Are Dynamite! is a Heritage Lottery Funded Project. The project launch event is supported by the Ahmed Iqbal Ullah Education Trust and Manchester Central Library.

LAUNCH EVENT: We Are Dynamite! Northern Carnival Against the Nazis: 40th Anniversary Project

EXHIBITION: We Are Dynamite! Northern Carnival against the Nazis: 40th Anniversary Exhibition