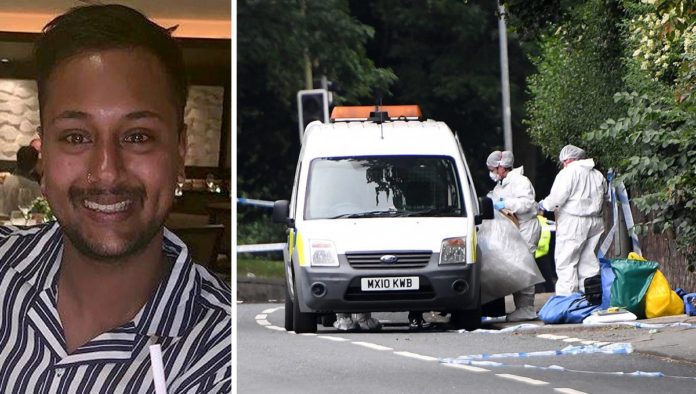 Hiran Chauhan left his work as a chef at a Norther Quarter restaurant at in July last year.

He travelled to Eccles on a tram before getting a taxi to the address of Cuckson.

When Hiran failed to attend work the following day, his concerned employees contacted his family, before they in turn contacted police to report him missing.

His body was sadly found a week later by a woman walking in woodland off Eccles Old Road, close to the junction of Brentwood.

The body had been wrapped in plastic garden sheeting and bedding.

Police immediately launched a murder investigation and – while conducting enquiries – noticed a man walking in the area who appeared to actively avoid their attention.

That man was Neil Cuckson, who after being stopped by the officers invited them back to his property so he could fill in a house-to-house enquiries questionnaire.

Having failed, Cuckson was then seen to drag the body toward the patch of woodland where it was later found.

He was arrested on suspicion of murder.

In interview, Cuckson said he’d met Hiran on an online dating app, before agreeing to meet and engage in consensual drug taking and sexual intercourse.

After Hiran’s death, further enquiries revealed Cuckson had travelled to Bolton to buy a wheelbarrow and a shovel in an aborted plan to bury Hiran’s body.

Cuckson also attempted to maintain appearances by continuing to go work at the convenience store he was employed at in Manchester City Centre – where he was training to become a store manager.

After several days and with Hiran’s body still within his flat, he purchased the silver Suzuki Swift seen in CCTV off an online marketplace website, as part of the failed attempt to move Hiran to a different location.

Cuckson also discarded Hiran’s phone on a footpath beside the River Irwell.

Duncan Thorpe, Senior Investigating Officer for GMP’s Major Incident Team, said: “It’s clear from the many tributes following his death that Hiran was a very popular and well-liked man.

“He was a friend to many, well-known around Manchester and for his career as a chef in the Norther Quarter. He will be sadly missed by friends, family and colleagues.

“Hiran could never have foreseen the dreadful consequences of visiting Cucksonthat evening. It’s clear that Cuckson was the driving force behind the pair’s drug use that night – mixing and preparing narcotics that he plied to Hiran, who was relatively inexperienced in such matters.

“After realising Hiran was dead, Cucksonwent to great lengths to attempt to conceal his body and avoid detection.

“These were the actions of a paranoid and callous man, who showed a complete disregard for the young man lying lifeless in his property.

“Why he did not contact emergency services immediately is beyond comprehension. His actions put Hiran’s family through a great deal of further stress and unnecessary suffering at what was already a dreadful time.”

Two Bury brothers jailed for over 10 years for sex offences against two teenage...