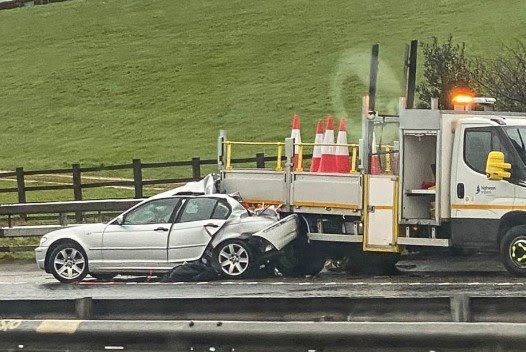 A eight-year-old boy has died and a six year old boy has been seriously injured in a serious crash on the M60 this afternoon.

A silver BMW hit a stationary highways maintenance vehicle which was on the hard shoulder on the clockwise carriageway close to Junction 23, Audenshaw just after 2.00pm

The driver of the BMW, a man in his 30s, has been arrested on suspicion of causing death by dangerous driving and drug driving.

The motorway is currently closed on the clockwise carriageway.

Sergeant Matthew Picton of GMP’s Roads Policing Unit said: “This is a tragic incident and our thoughts are with the boy’s family at this terrible time.

“Our officers are currently piecing together the circumstances of the collision and we would appeal for anyone who witnessed it, or who may have dashcam footage, to get in touch as a matter of urgency.”

70 year old man is killed after being hit by car on East Lancs...