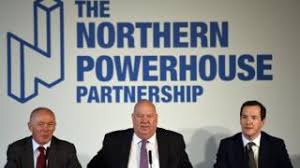 A new Landmark report sets out details of how the North can tackle productivity gap and create an extra 850,000 jobs.

The report from the Northern Powerhouse Partnership set up by the former Chancellor George Osborne, says that The North can be world-leading in four specific sectors critical to the UK economy.

It calls for Government funding alongside business investment and collaboration across traditional boundaries and rivalries and says that among many ways,Powering Leeds with hydrogen, investing over £1bn in portable nuclear reactors and leading the way on the Internet of Things are ust three ways the North can become £100bn more productive.

The report, Powerhouse 2050: The North’s Routemap for Productivity sets out sets out fully costed, evidence-based proposals for four areas of Northern excellence which could, with government funding and business support, rival the best countries and regions in the world.

It comes after monthsof research, workshops and engagement with more than 500 business of all sizes, universities, interest groups and many others by the Northern Powerhouse Partnership (NPP) which revealed the steps needed to be taken to make the North’s prime capabilities – Advanced Manufacturing & Materials, Energy, Digital and Health Innovation – world-class.

The workshops across the North were led by senior leaders from some of the North’s biggest employers, listening to views from a wide range of organisations.

Professor Juergen Maier, who led the Advanced Manufacturing & Materials research, said: “This Northern Powerhouse Partnership report sets out bold and original initiatives that could, with appropriate levels of funding and support, have a transformational effect on the North of England and provide a vital boost to productivity.

The digital reindustrialisation of the North of England is an essential part of our economic future to ensure that UK growth benefits the country as a whole.

“As digitalisation becomes central to our society and the future of manufacturing, the UK needs to invest in automation, innovation and science to give our UK industries the boost they need to be globally competitive.”

Andy Koss, CEO of Drax Power, who led the Energy engagement, commented: “The North is uniquely placed to deliver the UK’s energy needs. There are huge opportunities for us as a region – not just in terms of potential jobs and the economic benefits, but also the positive environmental impacts associated with decarbonisation.

“In the North we lead the way in existing energy technologies such as bioenergy, offshore wind and nuclear power – all vital in delivering the Government’s Industrial Strategy.”

The Digital theme was led by Stephen Church, Partner at EY. He added: “I believe this report has the potential to create a number of world-class industries in the North of England, which could make a significant contribution to the wider UK economy.

“Enhanced connectivity, such as fibre to the premises broadband or 5G roll-out, and better support for start-ups would be major advances in how we embrace the digital age, but equally important is creating incubators and co-working spaces to suit the needs of a modern workforce.”

Leading the Health Innovation theme was Dr Hakim Yadi, the Chief Executive of the Northern Health Science Alliance (NHSA). He said: “Health Innovation is key to the economic success and development of the North of England.  The North’s health innovation economy has a huge opportunity in this area to deliver, health and wealth benefits to the region, both through the new Life Sciences Industrial Strategy and the Northern Powerhouse agenda.

“The Northern Health Science Alliance is delighted to have been able to work with NPP on producing recommendations to grow the North into the powerhouse it has the potential to be.”

Acting Managing Director of Manchester Airports Group Collette Roche said: “The significance of this report for Northern businesses such as ours cannot be underestimated – the findings could have a transformational effect on the region in terms of productivity, jobs and growth.

“What is now vital is to ensure that we address the skills gap that exists in the North and ensure that we have the access to a skilled workforce to take these initiatives forward. I am delighted to be leading the NPP’s Education and Skills Board to investigate these important issues.”

Plans for Prestwich set for approval