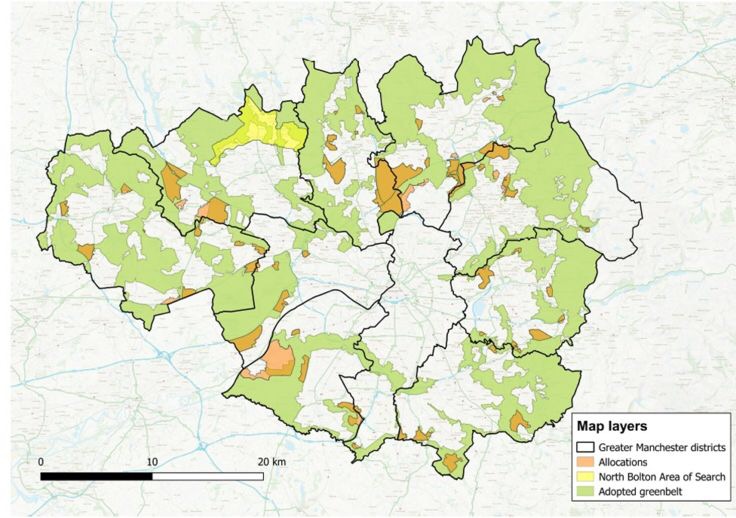 An ambitious plan to establish homes, jobs and green space across the region over the next 20 years, along with identifying the new infrastructure such as transport links and utility networks has been agreed by the ten authorities of Greater Manchester.

The Greater Manchester Spatial Framework (GMSF), first conceived in 2014, is an overarching development plan within which Greater Manchester’s ten local planning authorities can identify more detailed sites for jobs and homes in their own area.

The plan controversary includes options to build on green belt sites at Pilsworth, Carrington, Cheadle Hulme and Ashton Moss, some green belt building says the plan  is “essential” to keep up with the city region’s growth.

A key consideration of the development of the framework has been to adopt a brownfield first approach to land allocation. This focus has ensured that nearly three quarters of the proposed land supply is within the existing urban area on brownfield land with remaining new allocations from land being withdrawn from the greenbelt. A new greenbelt boundary for Greater Manchester will offer greater protection to prevent development in the newly designated greenbelt whilst also meeting our housing and employment needs over the next 20 years says the authors.

Also included are plans for  a new railway station at Droylsden, a new M62 junction at Islam and a Westhoughton bypass between Atherton and the M61.

The report says that up to  200,000 new jobs will be created as industrial and warehousing sites are built or increased, as well as work on new roads and infrastructure to support them.

Councillor Richard Farnell, lead member for planning and housing at GMCA, said: “Greater Manchester is a thriving city region, renowned across the world for its numerous technological and scientific advancements, sporting and artistic excellence. We support a culture of innovation and enterprise.” adding

“In order to continue to attract business, workers and tourists, we need to grow. We will successfully manage this growth and deliver major economic, social and environmental improvements. We are mindful that this needs to support Greater Manchester’s prosperity in the long term as well as meet its short-term needs.We want all residents of Greater Manchester to share in the benefits of this prosperity.”

Councillor Alex Ganotis, Leader at Stockport Council, said: “The GMSF proposals aim to ensure we meet the needs of our growing local economy and population.

“Any development plan needs to maximise the use of brownfield sites, minimise the impact on the Green Belt, and ensure that modern infrastructure properly supports new homes.

“It’s also important to note that nothing has been decided yet – this is an open consultation and I’d like to encourage all residents to participate and have their say on this plan.”

There will be a period of public consultation on the draft GMSF which will commence on 31 October 2016 and run until 23 December 2016. Views submitted will be considered and a final draft will be published in 2017 when another period of consultation will be held