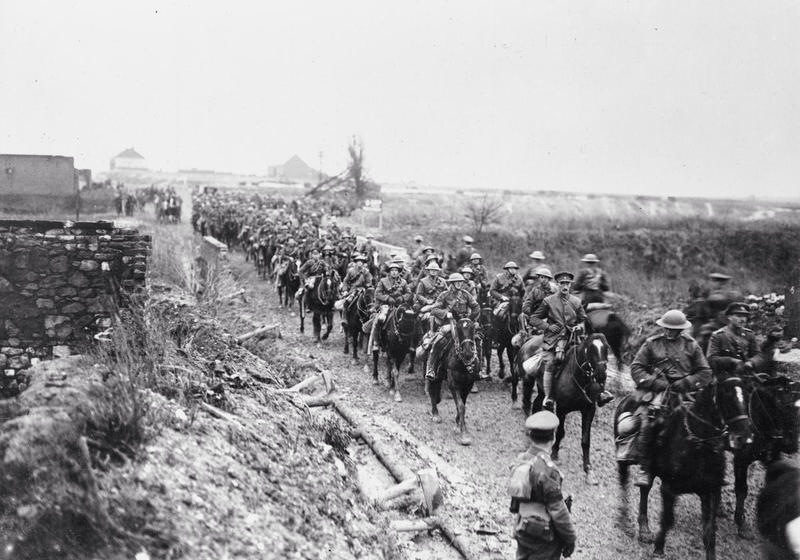 The stories from troops returning from the front were being heard for the first time in Manchester.

There was the account of a Broughton man who had fought at the battle of Cambrai.

Private Barnes had returned to England with a bullet wound to his thigh and had been struck in the back by shell fragments. He described fighting for four solid hours on ground devoid of cover of any description, two of his comrades were killed next to him, one with a bullet to the head.

Eventually along with twelve others, they took cover in a church which was being used as a hospital although the church was fired on before he was evacuated to St Quentin.

Around half a dozen members of the Manchester regiment had returned also to the city.

“It was a funny thing” said one ” to be under fire for the first time,” describing a five mile march and having just enough time to dig a trench before coming under fire from German shells.

He had seen a German aeroplane hovering over them signalling to the artillery the range.

“The plane had hardly gone when we were riddled with shot and shell” whereupon he was struck in the shoulder and and in the small of the back with shrapnel.

Another spoke of Mons: Private J Roe was part of 1400 strong brigade of which only 400 survived.

It was nothing but a death trap, fighting continued from 6am to 8pm” before I was wounded by shrapnel the following day….. I shall be only too glad to go back and have another go at them” he said.

Another told of digging trenches in Marigold fields.

the shells screamed all around and burst with a terrifying noise it was all new to me but after few terrifying moments I became used to the situation.”

After surviving three days of that battle he was shot in the thigh at Cambrai and produced the bullet which had been extracted at Cambridge.

“Anyone who came away from that affair per was lucky” he concluded.

Two people were killed when a mill collapsed in Bury.The new Victoria Mill was thought to have buckled under the weight of water being collected in a parapet after days of heavy rain, although the collapse had happened in the evening,office staff were still working

A Manchester man wrote to his brother from Paris he was worked on night duty at the Gard de Nord helping refugees and tending the wounded and described many French and Belgium peasants displaced by the fighting arriving.

A new recruiting office opened in Manchester for the Royal Marine Light Infantry, which Winston Churchill had asked the country to provide, at the admiralty offices on Deansgate.

Meanwhile the Manchester Battalion of Public Schools and University Force received orders for three hundred and thirty of its men to travel to the Epsom training camp.