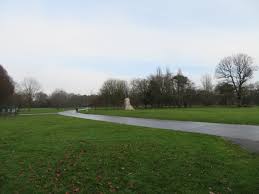 A 14 year old girl has been taken to hospital after being attacked by a dog in a Wythenshawe park.

The owner of the dog – a man – is then believed to have pulled the dog away from the girl before leaving the park in the direction of Hollyhedge Road.

The girl was left with a serious wound to her right leg and taken to hospital. She has since been discharged.

The owner of the offending dog is described as a male with dark brown medium length hair.

The dog is described as dark with white markings and is believed to be a Staffordshire bull terrier type dog.

Police Constable, Daniel Tang of GMP’s City of Manchester Division, said: “This was a particularly nasty attack in which a young girl has been left with a serious injury to her leg for which we wish her a speedy recovery.

“We’re appealing to anyone who may have been in the park at the time, or anyone who regularly walks their dog in the park that might have information that could help us to identify the owner of this dog. Any information, no matter how small, will greatly assist our investigation and we urge you to get in touch with police.”