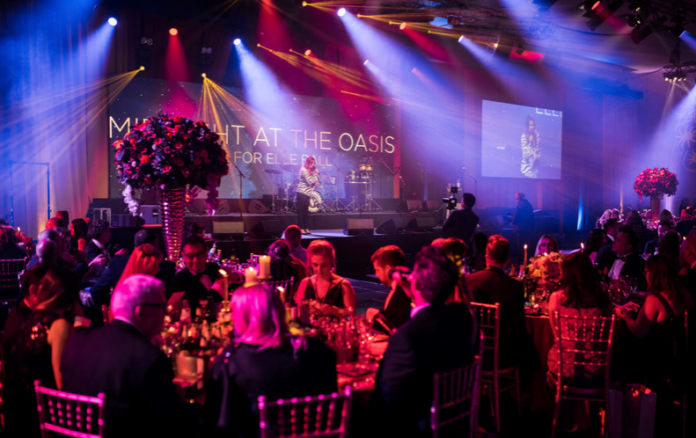 100,000 was raised at the inaugural Elle for Elle annual ball on Friday evening in aid of women who have escaped domestic abuse.

The ball, which adopted a ‘Midnight at the Oasis’ theme, featured a special performance from The Brand-New Heavies – with the acid jazz and funk legends performing a selection of their chart hits to raise money for the women’s charity.

Guests were treated to Moroccan glamour in Manchester inspired by the souks of Marrakech, including a tantalising three-course Moroccan food feast and entertainment throughout the evening.

An auction took place on the evening with prizes including VIP weekend tickets to Coachella Festival, a weekend trip to the Monaco Grand Prix, and a personal shopping experience at Louboutin World in Paris in aid of the women’s charity.

Elle for Elle founder and Rachel O’Hare said, “We are absolutely delighted with how successful our inaugural ball was on Friday evening. Julie Perry Events were instrumental in making sure this event was a success and we couldn’t be happier with the money raised on the evening.

“We are committed to raising funds to help women who have escaped domestic abuse, and the ball gave us an incredible chance to make a real difference to those women in need”.
Founder Lynette Page-Collin said “We are already looking forward to the next one and to continuing our mission at Elle for Elle”.

Elle for Elle is a charitable foundation dedicated to helping women and girls who have been brave enough to escape abusive relationships and are moving into refuges.

‘Dignity after Distress’, Elle for Elle’s main campaign, aims to help vulnerable women maintain dignity and practice self-care – by keeping bathrooms and cupboards of refuges stocked with beauty products, as well as providing beauty days for women to enjoy.
Elle for Elle also looks to provide women with qualifications and skills in beauty to ensure they have the opportunity to work within salons or for themselves after leaving refuges.

Recently receiving praise in Westminster for giving the nation’s most vulnerable women ‘moments of dignity’, Elle for Elle aims to raise awareness for the plight of thousands of women and even more children housed in women’s refuges throughout the UK.

Sponsors on the evening included Boodles Jewellery who donated a diamond ring, Equistone, UKCM and Suttons