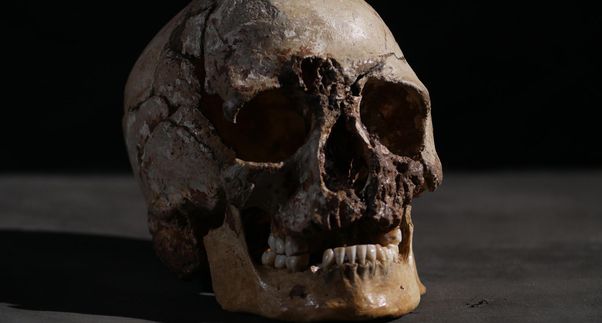 A Channel 4 film will exclusively unveil the face of Britain’s oldest complete skeleton. It

Airing as part of Channel 4’s critically-acclaimed Secret History strand, the hour long filM follows the UK’s most ambitious and cutting edge Ancient DNA project to date. For the first time, a team of top scientists at the Natural History Museum and University College London have analysed the DNA of Britain’s oldest complete skeleton.

Known as ‘Cheddar Man,’ this human male fossil was originally unearthed over a hundred years ago in Gough’s Cave in Cheddar Gorge, Somerset.

Building on this advanced genetic testing of his 10,000 year old bones, two of the most acclaimed palaeontological model makers in the world, Dutch identical twins Adrie and Alfons Kennis, have recreated his entire head to give this extraordinary skeleton a real identity for the first time.

The Kennis brothers are experts in recreating animals and humans that are scientifically accurate with a focus on human evolution. Through the combined efforts of the ground-breaking scientific research and accurate facial recreation, this TV exclusive will allow Britain to come face-to-face with the first inhabitant who we can directly connect to Britons today.

Since his discovery in 1903, science has done its best to reveal Cheddar Man’s story. But key questions like what he looked like, where he came from and how he relates to us have been impossible to answer – until now.

The First Brit: Secrets of the 10,000 Year Old Man endeavours to answer these questions, connecting us ever closer to our oldest modern ancestor by revealing a story never told before of who we are, what we looked like and where we came from.

The moral side of GPS trackers for children – Do or Don’t?