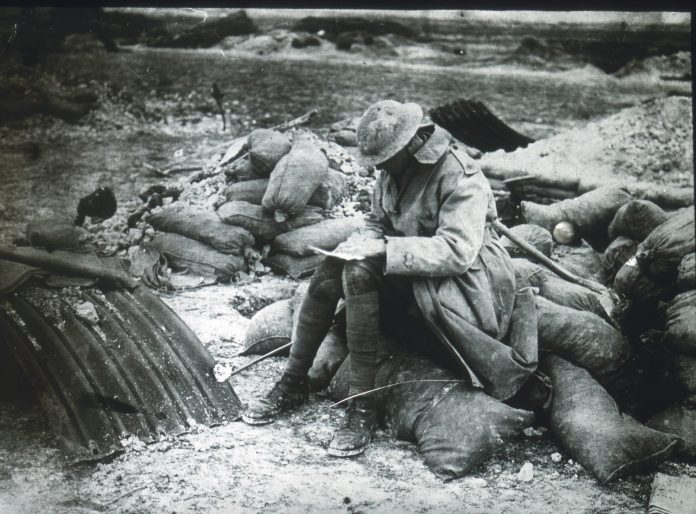 Today sees the centenary of the Battle of Manchester Hill, a battle that in one day took the lives of 79 men from the Manchester Regiment.

Now, one hundred years on, the part played by valiant soldiers from the Manchester Regiment in the Battle of Manchester Hill is to be commemorated both here in Manchester and over in France at the hill that still bears the name ‘Manchester Hill’.

The Battle of Manchester Hill took place in an area of high ground just outside Saint-Quentin in northern France.

The hill had become known as Manchester Hill after being captured by the 2nd Battalion Manchester Regiment – a battalion that included war poet Wilfrid Owen – in the previous year, April 1917.

The Regiment continued to hold and defend their position there until 21 March 1918 when the hill was attacked by the German army.

Despite a heroic defence by the 16th Battalion of the Manchester Regiment their action was unsuccessful with most of the battalion dead or wounded by 4 pm that day.

Out of 8 officers and 160 men who went into action on the hill, just two officers and 15 other ranks returned to British lines. Of the remainder, 79 men were killed and the rest either wounded and subsequently taken into captivity, or taken directly as Prisoners of War.

Among those who lost their lives was 29 year old Lieutenant Colonel Elstob, who led his troops selflessly into battle with the words ‘Here we fight. Here we die.’

To commemorate the centenary and learn about the sacrifices made by so many during the war, more than 40 pupils from 22 schools in Greater Manchester have spent the last few days on a tour of World War One battlefields in Belgium and France.

Their tour ends at Manchester Hill and the nearby village of Francilly Selency tomorrow – exactly 100 years to the day since the battle of Manchester Hill was fought. There, pupils will join members of the Duke of Lancaster’s Regiment, alongside local villagers and dignitaries to pay their respects to those who fought in the battle at a service of commemoration in the local church. The service will end with the laying of wreaths on the village war memorial.

Further commemorative events are planned in Manchester over the next few weeks.

These include a wreath-laying ceremony at the Cenotaph and a special service at Manchester Cathedral on April 15th – one hundred years to the day since a similar service was held there in 1918 to remember those who had just lost their lives in the battle.

Plans have also been revealed for a unique cultural event ‘Manchester Hill Remembered’ that will take place on Friday 13 April at 8 pm, at Manchester Cathedral.