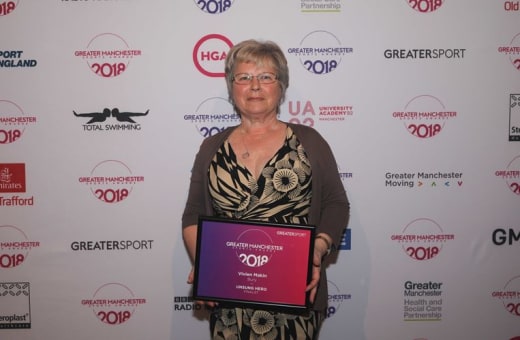 A woman who has dedicated 50 years to Bury Hockey Club has won the Unsung Hero title at the Greater Manchester Sports Awards.

Vivien Makin followed up her win at the Bury awards by triumphing against the winners of the same category from the ten other local authorities across the region. The awards were held at The Point, Emirates, Old Trafford.

Vivien was nominated by her club, formerly known as Bury Jaguars Juniors and Elton Ladies over her many years with the club, during which she has served as president and welfare officer and coached in local primary schools.

She is widely known as ‘Mrs Hockey’ due to her commitment to the sport and for helping hundreds of young people to develop their skills.

Viv said: “I was delighted to win the Unsung Hero award at the Bury Sports Awards; however, to win at the Greater Manchester Awards was quite amazing.

“Working on a voluntary basis to promote hockey in school is a pleasure and I am always grateful that teachers invite me in to coach. That some children decide they like playing and go on to Bury Junior club on Friday evenings at Castlebrook is a bonus. I am passionate about playing hockey and hope that I can pass that on to children and adults who want to play.”