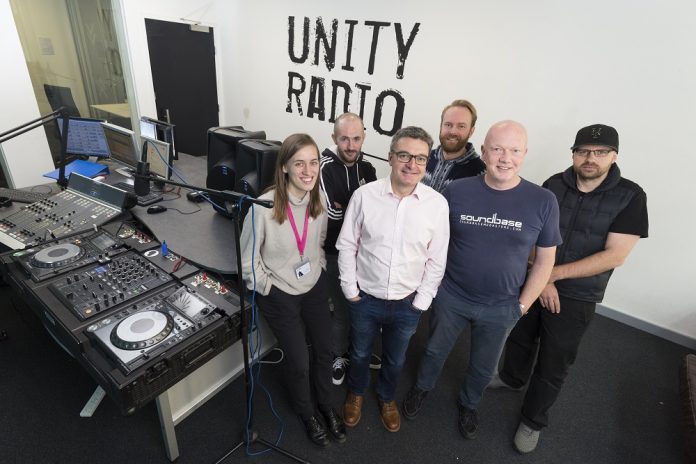 Manchester’s Unity Radio, an independent youth-focused music platform which works with young people to help them get a foot in the door of the creative industries, has moved into a new base at The Landing @MediaCityUK.

Unity Radio, which broadcasts local, national and international dance and urban music for people in the 15 to 40 demographic, focuses on engagement and outreach with the local community to offer creative opportunities which improve well-being amongst young people across Manchester.

The story of Unity Radio began in 2001 when founder Jon Green set up a pirate radio station with close friends Wesley Milne and Robert Hargreaves in Moss Side. Jon and Robert had grown up together in South Manchester and bonded through their experiences in foster care before being adopted. Tragically Robert was murdered in the same year. Jon continued to run the station between 2001 and 2004 with others in the radio community to help young people in care or who had been victims of serious and violent crime.

Over the next year, Jon became a supplier for Manchester City Council and worked for InTheCity Radio to deliver the restricted licence services for the music conference and Tony Wilson. He then submitted a bid to Ofcom with Dot Communications, Tom Clarke and Youth Charter for Spore founder Jeff Thompson, but was beaten by XFM.

In 2005 Jon also met Julian Guest while working on the Unity Radio website. In 2007, the pair incorporated North West Media and applied for an Ofcom licence, beating off 30 other applicants to win the bid in 2008. Given a two-year timespan to launch, they were unfortunately hit by government cuts. In the same timespan they received a High Sheriff Award for involvement in projects to lower gun crime in gangs in South Manchester by 70 per cent, but then in 2009, Jon had another setback when both his adoptive parents died within two days of one another.

Unity Radio was eventually launched in Ancoats on December 10, 2010, Jon’s adoptive mother’s birthday as a mark of respect. The team was further strengthened in 2014 with the addition of business development manager, Lee Dinsdale, and continues to grow from strength to strength, culminating in the move to The Landing at MediaCityUK in 2017.

Jon said: “We’re very proud of where we came from and where we are travelling to – and we feel that being based at The Landing at MediaCityUK now really shows our young people what can be achieved. It’s so important to never forget where you came from and, for us, we need to keep reflecting and championing our community roots and our relationships with young people. This is our whole DNA and culture – and it was attracting talent from the streets which gave us the power to become an official Ofcom registered station.”

Unity Radio is currently running the Changing Self Belief project until June 2019, which is raising awareness of issues surrounding young people who are at risk of harm as a direct result of going missing.

Commissioned by Greater Manchester Mayor and Crime Commissioner Tony Lloyd, the project will see Unity Radio working with 50 young people from across Greater Manchester for the next two years, hosting weekly workshops and discussion via a weekly live radio show. Following the project, young people taking part will be able to volunteer with local youth projects, with Unity or access further training and education opportunities.

Julian Guest said: “This project gives young people a voice and the opportunity to explore the reasons behind going missing and the vulnerability which can result from potential exploitation, radicalisation and crime. We offer a powerful alternative to traditional youth intervention and have a proven track record of positive impact. Last year, 4,000 children went missing across Greater Manchester in 16,000 reported incidents and we are delighted to be working on such an inspiring project, partnering with children’s services, missing from home teams and children’s charities to help with referrals.”

Julian continued: “We are delighted to have moved to The Landing as we feel this is an aspirational place to be for the young people who we work with, with broadcast giants such as the BBC and ITV being based here.”

Paul Billington, commercial director at The Landing, said: “Unity Radio is carrying out a lot of extremely interesting, valuable youth intervention work in our local communities and we are very proud to have the team based here.

“The Landing’s businesses together contribute more than £25m to the Greater Manchester economy, as well as over 600 jobs in the Salford community. We are delighted to help and support our tenants on their journey in any way we can.”

Cuts to Sure Start spending linked to increased childhood obesity