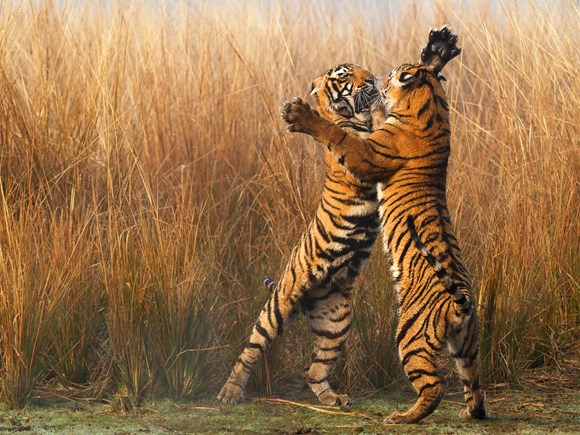 As we enter the 2022 Year of the Tiger, WWF’s latest report looks at some of the ways the decline in wild tiger numbers has been reversed over the past twelve years and the threats that remain to the future of this iconic big cat.

From an estimated population of around 100,000 a century ago, wild tiger numbers hit an all-time low of as few as 3,200 in 2010, the last Year of the Tiger. That year, the governments of 13 countries which had, or used to have, wild tigers came together for the first time at a summit in St Petersburg where they committed to double the number of wild tigers by 2022, the next lunar Year of the Tiger.

WWF’s Impact on Tiger Recovery 2010-2022 report brings together more than a decade of work and collaboration with partners on tiger conservation and details both the lessons learned and the challenges that remain.

Success stories include India reporting an estimate of 2,967 wild tigers in 2018, up from an estimated 1,411 tigers in 2006 and the adoption of the Conservation Assured Tiger Standards (CA|TS) partnership across all the country’s 50 tiger reserves.

Forest restoration through community stewardship in a transboundary wildlife corridor between Nepal and India, the Khata corridor, which has been used by 46 individual tigers and other wildlife in the last five years.

The designation of the world’s largest tiger protected area in China, a massive 14,500 sq. km park along the Russia-China-North Korea border.

Despite considerable progress, the gains have not been uniform across tiger range countries with declines in Malaysia and tigers now thought to be extinct in Cambodia, Laos and Vietnam. While the global estimate for wild tigers may be on the rise, their range has continued to diminish, with tigers today restricted to less than five per cent of their historic range. They remain under threat from habitat loss and fragmentation, climate change, human-wildlife conflict and the illegal wildlife trade.

“The 2010 Tiger Summit set in motion an unprecedented range of tiger conservation initiatives. The results of which demonstrate what can be achieved through long term and collaborative commitments to species recovery. The dedication of field teams, conservation partners and communities living in tiger landscapes are behind these extraordinary results.”

Becci May, Senior Programme Advisor for Asia at WWF-UK, said:

“Protecting tigers isn’t just about saving a single species. Wild tigers are indicators of a healthy ecosystem, keeping herbivores in check, which helps to maintain healthy habitats. Globally, tiger landscapes play a significant role in storing carbon in their forests, grasslands, and soils, and reducing the impacts of natural disasters. We must do more to halt and reverse nature loss for the benefit of wildlife and people.”

The next phase of the Global Tiger Recovery Plan will be determined at the 2nd Global Tiger Summit in Vladivostok in September. It will play a critical role in shaping the future of tiger conservation and is also an opportunity to set an ambitious new goal for range expansion.

WWF’s work will continue to support core tiger conservation activities including effective management of protected areas, disruption of the illegal wildlife trade, and demand reduction for tigers and their parts and products. WWF will also continue to partner with local communities to build connectivity, encourage tiger reintroduction in the former range, and reduce human-wildlife conflict while promoting climate change adaptation and mitigation and ecosystem restoration.