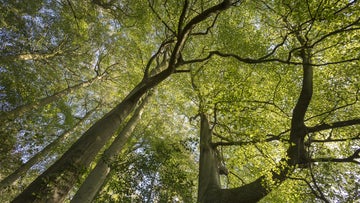 The crunch of snapping twigs underfoot. Lilting birdsong from above. The rustling of trees in the breeze. Woodland sounds have been shown to have a direct impact on our wellbeing, making us more relaxed, less stressed and less anxious.

A new mental chronometry study commissioned by the National Trust explored how soaking up the sounds of the natural world affects people, and found it relaxes us more than if we listen to a voiced meditation app, and in the tests, reduced feelings of stress and anxiety by over a fifth.

With more than 3.19 million hectares of woodland spread across the UK it’s one of the most accessible solutions for those looking for ways to relax.

The study, which used measurements of elapsed time between listening to audio stimuli and subsequent behavioural responses, reveal ed that on average, those immersed in woodland sounds such as a trickling stream, birdsong, or crunching leaves, reported a 30% increase in feeling relaxed. This is compared to no change in feeling relaxed for those listening to a voiced meditation app.

The data highlights how being immersed in the sounds of woodlands can positively affect our overall levels of wellbeing, and shows that time spent listening to the sounds of the natural world has a direct impact on how we feel.

Dr Eleanor Ratcliffe, Lecturer in Environmental Psychology, University of Surrey, comments: “There is a large body of scientific evidence demonstrating that experience of nature can benefit health and wellbeing, including recovery from everyday psychological stress.

“Much of this research has focused on visual experiences, but more recent work has shown that the sounds of the outdoors, such as birdsong, wind, and water, can also improve mood and reduce stress. These sounds offer a way to connect with nature no matter where you are.”

Further research of 2,000 British adults on behalf of the National Trust reveals birdsong is the favourite sound of woodlands, with almost 40% stating hearing their favourite woodland sounds makes them happy. However, despite the positive impact the sound of woodlands has on our wellbeing, for almost a fifth of Brits, they never venture to nearby woods because they don’t think there are any near them.

Patrick Begg, National Trust Outdoors and Natural Resources Director, comments: “Sometimes, a simple walk in woodlands, where you’re surrounded by the echoes of calling birds, and that satisfying crunch of fallen leaves and twigs underfoot, is the perfect remedy for reducing stress.

The study forms part of the National Trust’s research into the importance of special places and their impact on wellbeing, with previous research [3] highlighting how on average, those with a place of significant importance in their lives report higher levels of happiness, life satisfaction and even generosity.