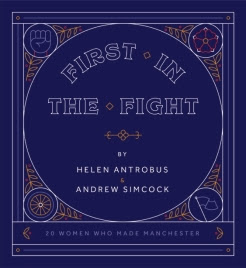 Women in Print has been announced as the creative partner to First in the Fight, which will be published in autumn 2019. Featuring the inspiring stories of 20 radical Manchester women written by Helen Antrobus and Andrew Simcock, the book will also feature individual illustrations by the Women in Print collective.

Emily Wright, of iNostalgia publishers and Editor of First in the Fight says, “First in the Fight is going to be a very special book. In it we’ll be celebrating the lives of each of the women through Helen’s writing and sitting alongside each narrative will be the work of a different female artist, visually representing their legacy in a creative way.”

Jane Bowyer, Founder and Curator of Women in Print, says, “First in the Fight will contain some original Women in Print work alongside completely new never seen before commissions, with the result being 20 individual illustrations that span the stories and legacy of these amazing women. This is a wonderful opportunity to showcase the work of talented female artists in the North of England including Helen Musselwhite, Deanna Halsall, Eve Warren, Ellie Thomas, Halah El-Kholy and Maisy Summer.”

Jane Bowyer has also designed the cover for First in the Fight. Taking inspiration from the Manchester Suffragette Banner (part of the collection at People’s History Museum) that the book got its title from. The cover features the red rose of Lancashire alongside symbols of resistance and protest. The bicycle wheel is a nod to the charity bike ride that Andrew Simcock carried out in 2014, which marks the beginning of a campaign that would lead to the Our Emmeline statue and from this the First in the Fight book.

Andrew Simcock, Chair of the Emmeline Pankhurst Statue Committee, says, “We want First in the Fight to champion the achievements of the trailblazing women in Manchester who have contributed to making this a city that has nurtured progression. I am delighted that supporting this project are two current trailblazers Jane Bowyer and Helen Antrobus, who I’m delighted to be working alongside to write First in the Fight.”

First in the Fight has a fascinating story of its own. Each of the book’s 20 women were part of the Womanchester campaign, which began in 2014 to create the first female statue in Manchester since 1901 and led to the unveiling of Our Emmeline on 14 December 2018 marking the centenary of Votes for Women. As well as sharing the inspiration of Emmeline Pankhurst, First in the Fight illuminates the powerful stories of all the women that featured on the list that the public voted for. It is a collaboration between Andrew Simcock, who spearheaded the Our Emmeline campaign, social historian Helen Antrobus and publishers iNostalgia.

First in the Fight will be published by iNostalgia, which specialises in books that make social history engaging to all through images and memories. Publication will be in autumn 2019.