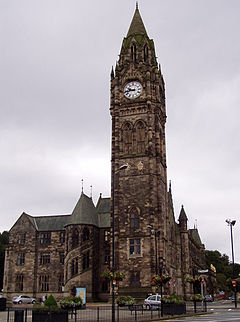 As the country gathers tonight to see in 2018, the chimes of Big Ben will herald the new year.

But after tonight they will be silenced as work continues on the four year, multi-million pound renovation programme on the Gothic Tower.

Fear not though for the Northern Powerhouse Minister has a solution and it’s close to home.

Jack Berry has written to the Tony Hall, the Director General of the BBC to suggest that the corporation broadcast the chimes from the clock above Rochdale Town Hall, which has the same “Westminster chimes” as Big Ben.

In his letter, Berry writes of a recent visit to Rochdale, where he stood in awe of the Grade I-listed gothic masterpiece.

“During my visit, I stood at the base of the tower and, as the clock struck 11 and the tower bells rang, I was struck by their similarity to those I hear so often in Westminster and on your programmes,” he wrote. “I think, due to the building’s national importance as a heritage site, it would be a wonderful opportunity if you would consider using these bells temporarily in your broadcasts.

“In addition, it would bring tremendous joy to the immediate community – and the whole northern powerhouse – to provide these iconic chimes, even if just for a limited period,”

Rochdale’s iconic Town Hall, a Grade-I Victorian Gothic building completed in 1871 as a symbol of the town’s prosperity built on its mills and rumoured to have been a favourite of Hitler, designed by the architect William Henry Crossland

The clock tower stands 190 feet tall but is not the original which had to be replaced after a fire in 1883, the new tower was designed by Alfred Waterhouse who was also the architect responsible for Manchester Town Hall and the Westminster.