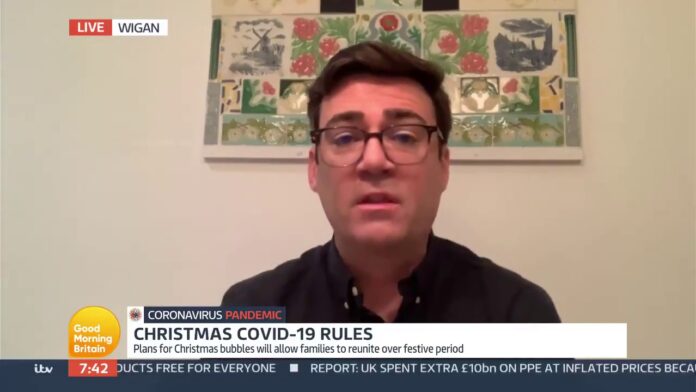 The Mayor of Greater Manchester Andy Burnham has criticised the Government’s plans for Christmas asking what the price is that people will have to pay.

Interviewed on ITV’s Good morning Britain, the Mayor said that the plans which will see three households allowed to bubble for five days, is too much.

“It could be December in a pretty miserable Tier 3 for many people and then possibly a January in Tier 3….I don’t think that the Government has got the balance right” he said

Burnham suggested that allowinmg two households to mix for a couple of days should be the limit or maybe just on Christmas Day.

The Mayor is not alone in his criticism although Graham Medley, Professor of Infectious Disease Modelling, said it’s up to individuals to consider the risks of meeting up at Christmas interviewed on the Today programme

“It is inevitable if a lot of people do take that risk, even if it’s a small risk, then it will end up with a lot of people in hospital and potentially having to take measures in January to lockdown againbut at some point the Government is going to have to pass those decisions to individuals,”

He said families who want to see elderly relatives should isolate as much as possible beforehand, think about the order in which they see people and the amount of time.

“The idea of bubbles really only works if people are completely faithful to that bubble,” he said.

He added: “In the end, the big thing is to weigh up the consequences of getting that risk wrong… there might only be a one in 100 chance in something going wrong and me infecting my mother for example, but do I really want to take that risk in terms of what the outcome is for her?”

Next Phase Of Leading Health Innovation Campus Submitted For Planning