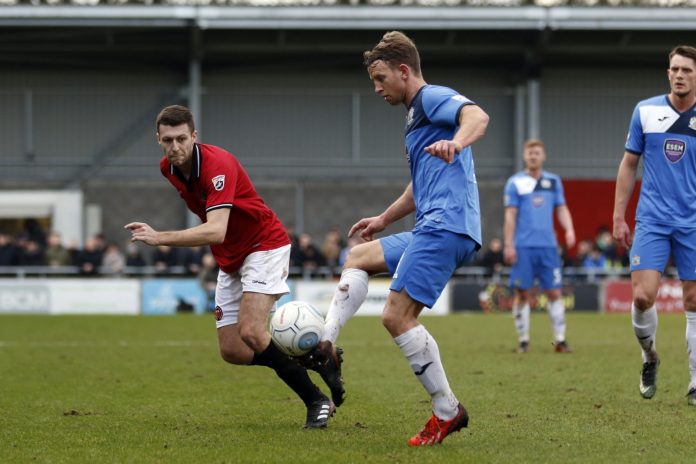 Stockport County marked their return to National League North action for the first time in three weeks by edging out near-neighbours FC United, at Broadhurst Park.

Matty Warburton’s 17th goal of the season,and his fifth in three of County’s four matches against FC this season proved enough to earn a victory that moves the Hatters to five points away from the play-off places, with a game in hand over the two clubs immediately above.

First half goals from Danny Livesey, Jack Redshaw and Gus Mafuta helped Salford City to return to winning ways with a 3-2 win at Alfreton Town.The win leaves the Ammies top of the table with a two pint gap over nearest rivals Harrogate Town.

Niall Cummins helped himself to a first-half hat-trick and might even have claimed four goals before the interval, but for Adam Bartlett’s 28th-minute penalty save as Curzon Ashton demolished York City 4-1 at the Tameside stadium.

In the Evo Stik Premier Division, bottom side Sutton Coldfield made Altrincham work hard for the three points, the visitors taking the lead before the Robins equalised thru Max Harrop. It took a eightieth minute penalty though for the league leaders to win the game, substitute John Johnston converting from the spot.

Barwell and Ashton United shared the points for their second 1-1 draw of the season.Craig Reed putting the home side in front on the half hour mark before Ashton equalised five minutes later through Daniel Mooney.

A last gasp equaliser denied Stalybridge Celtic a thoroughly deserved three points after coming back from a goal deficit in the first half against Hednesford.Jack Walton gave the visitors the lead just before half time before two goals from Matty Wolfenden seemed to have given the home team all three points before Tom Thorley struck home right on the stroke of full time.

In the Northern Division,two second half goals from Luke Porritt and Dave Brown saw Hyde United claim all three points at Ossett Town and saw the Tigers stay in the automatic promotion spot.

Droylsden and Trafford shared the points at the Butcher’s Arms, an Aaron Burns penalty for the visitors cancelling out a own goal by skipper Steve Mason.