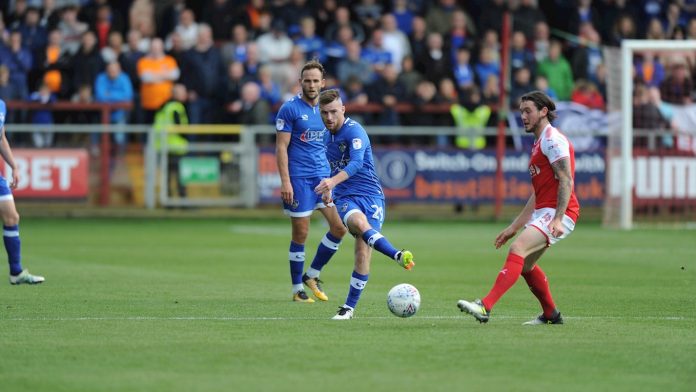 Both Oldham Athletic and Rochdale find themselves in the relegation spots League one after the weekend fixtures.

Oldham claimed their first point of the season at Fleetwood but were denied all three points after the home team equalised from the penalty spot in added time.

Craig Davies had put Latics ahead in the first half, the goal was cancelled out minutes later but a wonder goal from Kean Bryan, ten minutes after the break seemed to have secured all three points for the Latics before Ashley Hunter fired down the middle to secure a point for the Cod Army.

Rochdale were beaten 3-0 by a clinical Blackburn Rovers at the Crown Oil Arena. Richie Smallwood opened the scoring with a fine volley after ten minutes, before Marcus Antonsson doubled the visitors’ lead shortly before the hour mark.Substitute Danny Graham added a third late on to wrap up the scoring.

Goals from Jermaine Beckford and Nathan Cameron are not enough as Bury suffered defeat at Rotherham after Lee Clark named an unchanged starting eleven for the first time this season. The Shakers coming twice from behind before Rotherham won the game with less than 90 seconds on the clock with a strike from substitute Richie Towell.

Wiagn went down to a first Sky Bet League One defeat of the season against in-form Shrewsbury Town at Montgomery Waters Meadow, a first half-goal from Stefan Payne enough to separate the sides.

Bolton find themselves bottom of the Championship after a 3-0 defeat against Middlesbrough at Macron Stadium.Two goals from Britt Assombalonga before with twelve minutes to go,  debutant Marvin Johnson’s shot from the edge of the box squirming beneath Ben Alnwick to put a generous gloss on the result for Garry Monk’s men.

Third promotion in four years as Class of 92 just one step from the...