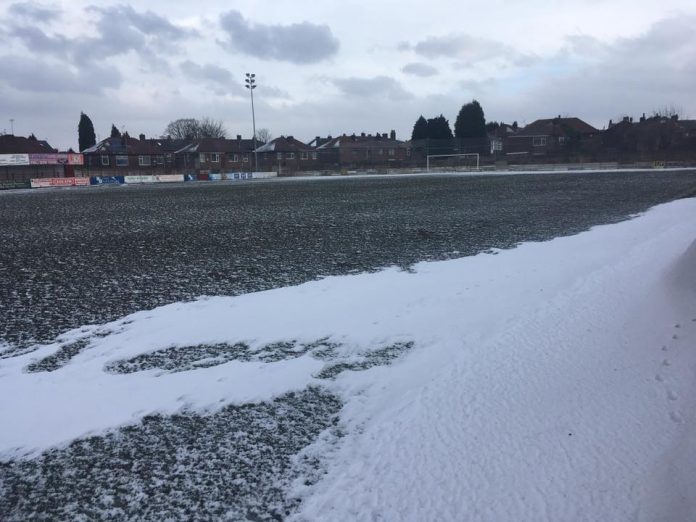 Rochdale’s home fixture against Plymouth and Bury’s trip to Doncaster are both early victims of the bad weather this weekend.

The game at the Crown Oil Arena has been postponed on safety grounds.

“It has been called off due to the dangerous snowy and icy conditions in and around the stadium, and the severity of weather conditions across the country and nearby routes.” said the club.

Club Doncaster staff had worked throughout Thursday and Friday to clear the Club Doncaster Sports Village car parks and inner ring road, as well as clear snow and ice from within the stadium itself.The referee Richard Wigglesworth carried out a pitch inspection on Friday afternoon and deemed the pitch playable, but after discussions with the safety advisory group, South Yorkshire Police and the EFL the game has been postponed.

At the moment Wigan’s game at Blackburn on Sunday goes ahead as does Oldham’s trip to Scunthorpe.

In the lower leagues Salford’s trip to North Ferriby has been postponed as has Stockport’s trip to Chorley, and FC United’s home game against Gainsborough, and Curzon’s home tie against Nuneaton.

In the Evo Stik League’s only Hyde’s trip to Atherton Colleries has so far beaten the weather, all other games involving our clubs have been postponed.

In Rugby League,Salford Red’s fixture against  St Helens will not take place tonight after parts of the surface remain frozen even though it has been covered for more than 10 days.

It has been rescheduled for Sunday but theree will now be a pitch inspection on Sunday at 10am and then a further one at noon.

Sale Sharks game at Northampton goes ahead at the momentat Franklin’s Gardens in Round 17 of the Aviva Premiership.

There is one change from the starting fifteen which began at Bath last weekend with former All Blacks lock Bryn Evans returning to the second row after recovering from injury.
England winger Denny Solomona, who signed a new long-term contract with the Sharks earlier this week, is also named in the starting fifteen.

Meanwhile Scotland winger Byron McGuigan, who also penned a new long-term deal with the club yesterday, makes a welcome return on the replacements bench after being injured on international duty with Scotland during the Six Nations.

Dale fall in the last minute to Rathbone goal