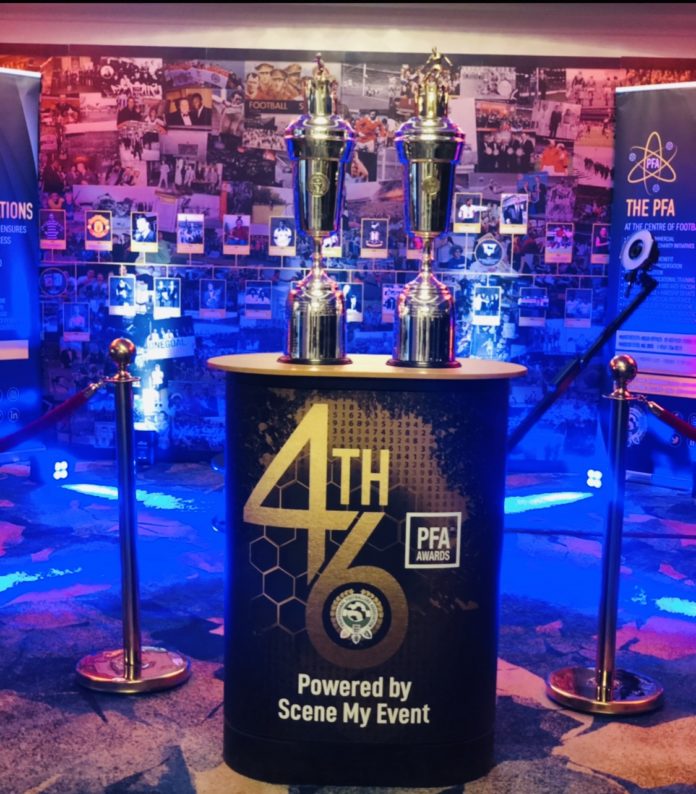 Events company Scene My Event got a host of the Premier League’s biggest football stars into a spin – with their incredible 360-degree camera at the Professional Footballers’ Association awards evening.

Bolton & Bury-based Scene My Event‘s Chris Warbrick and Martyn Stuttard were invited to showcase their ‘360 Xperience’ technology at the glittering end of season event at London’s Grosvenor House Hotel on Sunday.

Martyn, from Bury, said: “The reaction on the evening was phenomenal! There was a constant queue all evening with people using it several times due to how fun and interactive it is. The award winners themselves all used the platform with their trophies and all commented on how amazing it was and that they had never seen anything like it before.”

Up to four guests at a time can stand on the podium, which can be branded, and then a camera mounted on a mechanical rotating arm will spin 360 degrees around them whilst recording. Guests can have props and move around to create a fun video.

The video can also be formatted with the clients branding and effects such as slow motion and super speed to make it even more fun with extra features like confetti drops etc. Within 5-10 seconds the videos are available on branded sharing stations, where the guests can email, text or upload the video to social media.

Scene My Event invested in the technology last year, and it is one of only approximately 15 of the machines in the world.  It has already been in high demand for private and corporate events due to how engaging it is for guests and its vast potential social reach and brand awareness that it can generate.

Chris, from Bolton, said: “Being involved with a brand and organisation as iconic and prestigious as the Professional Footballers’ Association has been a huge honour and massively exciting for us. We have been able to work alongside a number of highly experienced and established companies, to bring together what has been called one of the best PFA awards evenings to date. It has allowed us to grow our network and generate a high amount of creative and exciting content that will also us to promote our offering in ways like we haven’t been able to before. We’re now already in conversations with other well known global brands on how we can use our products applications and other services to create new marketing campaigns for them, which we’re very excited to be a part of and considered for.”

“We have been working with Chris and Martyn from Scene My Event on this project for a number of months now, to ensure it delivered a specific brief of bringing something new, interactive and innovative to the 2019 PFA Awards that people haven’t experienced before. What was delivered exceeded all of our expectations, and not only was it a focal point for our players, sponsors and guests but it has also created unique content that has now been viewed by millions of people across social media, which in turn has boosted even further the awareness of the the PFA Awards brand.”

The PFA awards is the latest high profile event that the Scene My Event team have been involved in, having helped organise, theme and provide entertainment to celebrity parties, weddings and events in recent months.

Corporate high-flyers turned events entrepreneurs Martyn, 33, and Chris, 31, only launched their company two years ago – but have already become a leading light on the north west private party and event scene.

And last year they were given a huge boost when Boux Avenue retail entrepreneur Theo Paphitis made them one of the winners of his #SBS Small Business Sunday twitter competition. The pair also caught up with Theo and his group’s retail CEO Kypros Kyprianou at Sunday’s football awards evening.

End of the United Road for Pogba?

Reds sign Lindelof and is their most expensive defender