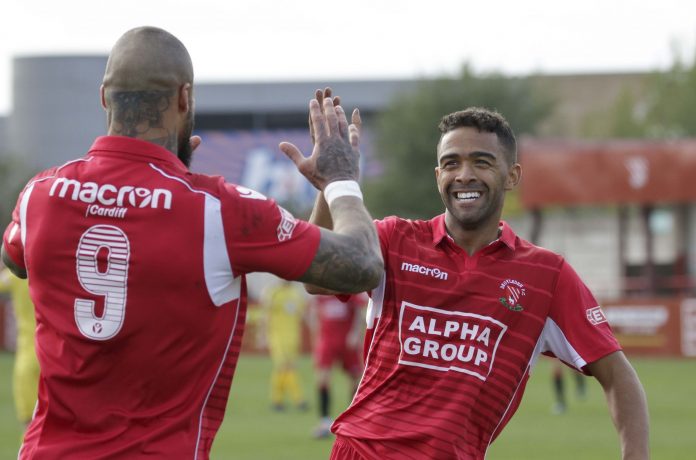 Salford City and Stockport claimed their places in the First Round Proper of the FA Cup on Saturday.

The Ammies won 2-1 at Marine,Rory Gaffney scored the winning goal after Danny Mitchley had cancelled out Danny Whitehead’s opener at the Marine Travel Arena, which Graham Alexander said he was ‘delighted’ about.

“The job today was to get through to the next round and we’ve done that, so we’re really pleased with that, we wanted to be in that draw on Monday so we’re delighted

Stockport won the all Greater Manchester tie with Altrincham,a goal in each half at Edgeley Park saw County safely through.The Hatters gained the upper hand by taking the lead through Frank Mulhern just prior to the end of a first 45 minutes in which ‘Alty’ had largely dominated possession, before Matty Warburton increased the advantage,and ensured County a place in the First Round proper

Ashton United though fell at the final hurdle, Devarn Green struck with eight minutes remaining for Southport, after the home team who took an early lead through Brad Bauress before had Captain David Lynch sent off at the start of the second half.

To the League and all four goals came in the second half for Hyde as they continued their good form with a 3-1 win at Stafford Rangers.Goals from John McCombe,Connor Simpson and Tom Pratt securing the win that pushes the Tigers up to 11th in the Evo Stik Prem table.

Stalybridge are three points ahead of them after a 2-2 draw at home to Farsley Celtic on Saturday, twice coming from behind to gain a point.

In the West Division, Droylsden hit Widnes for six at the Butchers Arms, five of the goals coming in the spave of 20 first half minutes.

A ten man Mossley rescued a point at home to Radcliffe after Rick Smith had put the visitors ahead,Adam Jones equalising for the Lillywhites with twenty minutes left who had  Steve Mason sent off  after a scuffle with Prince Haywood on the touchline.

Trafford’s five match winning streak in the league came to an end on Saturday when they were held to a frustrating goal-less draw by a spirited Colwyn Bay side at the First Point Shawe View Stadium.