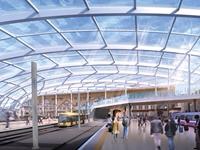 The planned upgrade of the Metrolink stop at Manchester Victoria, originally planned for the end of this year, is now set to be completed in early 2015.

The project, which will see the Metrolink stop completely redesigned and expanded to provide additional platforms and tracks, accommodating the new Second City Crossing and wider network expansion, needs additional time due to the complex nature of the construction.

To allow the work to progress, the stop has been closed to passengers since February 2014 and Metrolink services have been running through the station on a single line of track.

Due to the rescheduled completion date in the delivery of these improvements, single line running will now remain in place until February next year.

Debbie Francis, from Network Rail, said: “The completion of the Metrolink stop, which is part of the wider Manchester Victoria redevelopment, has regrettably been delayed and, after discussions with TfGM and Manchester City Council, is now due to reopen in February 2015.

“An extended closure of the line through the area is needed to complete the complex upgrade and this would disrupt passengers even further and impact the city in the build up to Christmas – one of the busiest times of the year for businesses and the economy.

“With this in mind, the closure of the track has been postponed and will now take place after the festive period. Further information will be available to passengers in December regarding the timing and impact of the closure.

“We apologise for the delay and inconvenience this will cause and continue to work with TfGM and Manchester City Council to reopen the line as quickly as possible.”

TfGM will continue to run double trams on every Bury to Altrincham service and a shuttle service between Bury and Abraham Moss will also stay in place to cater for around a third of journeys made on the Bury line.

Peter Cushing, TfGM’s Metrolink director, said: “We are disappointed with the delay on this project. We fully appreciate how much of a blow it will be for passengers who have been so accommodating of the temporary service changes these works have required and are sorry that the changes will now have to be in place until the New Year.

“To that end we will be working closely with Network Rail to ensure these vital improvements are delivered as quickly as possible and that our customers experience the minimum levels of disruption.”

Service to mark the relocation of the Cenotaph