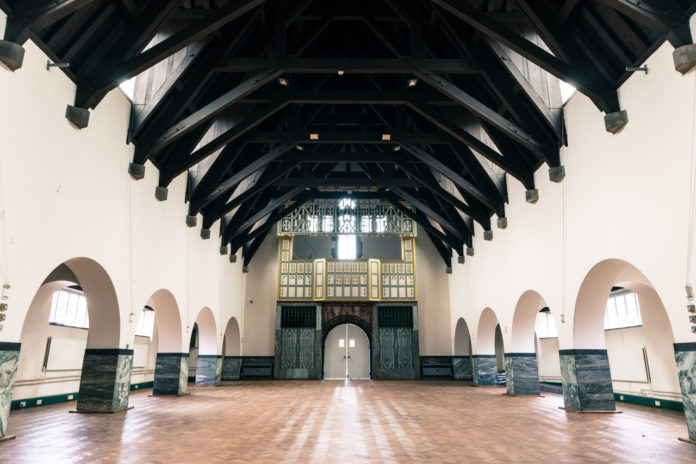 Just two miles south of the centre of Manchester stands one of the City’s hidden gems.

Manchester tour guide Jonathan Schofield describes it as the boldest building of its age in Europe, Nikolaus Pevsner, architectural historian said: is one of the most original buildings of that time in England or indeed anywhere.”

It is at least twenty years ahead of its time and if you take a closer look it has a flat roof, something that we would only become familiar with post Second World War.

But what is it doing here in this quiet  suburb and who was Edgar Wood? 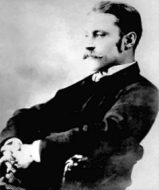 Wood, as we said was born on the other side of Greater Manchester in Middleton, the sixth of eight children, of whom only three survived to adulthood.His father wanted him to join the family textile business, he wanted to be an architect and they compromised with Wood becoming an architect.

He undertook his architectural training with Mills and Murgatroyd, a prominent Manchester practice whose buildings included London Road railway station and the redesigned Royal Exchange.

He established his own practice, first in Middleton and then in Cross Street in the centre of Manchester as he became more successful.

Jonathan describes him as the Charles Rennie Mackintosh of Manchester, who if he had taken up a large commission for example to build one of the large warehouses going up in Whitworth Street at the time would have left Manchester with an architectural classic.

Eccentric in the least, he would often be seen walking around in a black cape, scarlet inside and sporting an extravagant moustache carried a cane with a silver top and would be followed around by a dachshund called Lilly Lies Low.

He always wanted to be in control, and would cherry picked smaller projects and ones which he could control and this building is a prime example.He generally worked with only a single assistant, thereby enabling him to retain personal control of projects.

This was a commission for the First Church Christian Scientists, an American denomination who as the name suggests believed that God was a Scientist, who asked Wood to design its first church in Europe. They wanted something distinctive and that would stand out. The result was an expressionist church with an abstract quality, very different to conventional Art Nouveau, and a style that hadn’t been seen before, firmly placing the building in the arts history books.

The main building, which looks like it embraces you as you walk up the entrance path, greets you with an art nouveau doorway and as you enter into the main room you are instantly drawn to the repeated semi-circular arches in the timber roof and the gushing of natural light which fills the room. The floor runs downhill to the marble reredos, which is reminiscent of Viennese Secessionist design – as is the balcony screen which encases the organ stand. 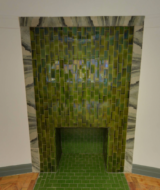 In the ‘reading room’ there is a beautiful Art Nouveau fireplace – a deep emerald green colour – which according to architectural experts would be well placed in the British History Museum.

Wood never really realised his potential he submitted several plans for designing housing estates for the growing suburban Manchester but they were never accepted.

Wood’s father died in 1909, freeing him from the need to accept large architectural commissions and allowing him to devote time to painting. He seems to have travelled extensively before retiring and, in 1922, settling in Italy, where he designed and built himself a house and garden at Porto Maurizio, Liguria, living there until his death on 12 October 1935. He is buried not far away.

Danny Samuels, a director of the company owning the building, is working closely with the Edgar Wood Society and said: “Having this beautiful space in Victoria Park is absolutely fantastic and I couldn’t be prouder to have been fortunate enough to be its custodian.”

The Edgar Wood Centre is now available for functions, and is fully licensed to hold ceremonies in any of the function rooms, which can cater for up to 300 people, and is ideally situated near the motorway network for access and the city centre for accommodation.