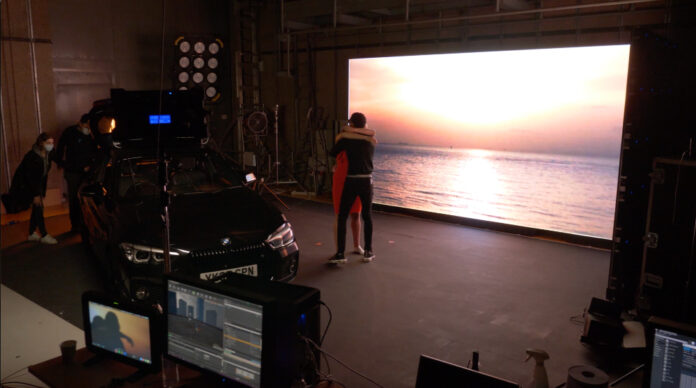 The studios also fulfill the future-focused Vectar Project’s ambition to offer no-energy filming, delivered not only by its real-time virtual sets, but by further green enhancements such as LED lighting powered by the sun, paperless production and virtual attendance for producers.

Producers using this technology no longer need to add visual effects in post-production, as they can be worked on and developed throughout pre-production, it also reduces the need for set building and world wide travel, especially when not possible or affordable.

The Vectar Project launched in 2019, and was born out of ‘Z Film Studios’, which has been a vital part of the North West TV and film production industry for the past 25 years. So far the Vectar Project has worked with BBC, ITV, Netflix, Universal, Amazon Prime and has helped to delivered content for TV shows including Big Talk Productions’ Cold Feet, Saffron Cherry’s ‘The World According to Grandpa’, films including Genesius Pictures’ Mrs Lowry & Son (Timothy Spall, Vanessa Redgrave) and commercials for brands including Lenor and Dreams, plus many other projects yet to be announced.

To ensure the new technology is accessible to emerging talent, and to support diversity in the industry, The Vectar Project is launching Green Days, a new initiative for small productions, offering free pre-production support and studio access for selected projects, to help them realise their ambitions.

Preference will be given to films focussed on climate change, and a dedication to saving the planet’s resources and upholding green policy will be essential in order to be selected.

Managing Director of The Vectar Project, Tom Henderson said: “The film industry has done so much to create awareness of the damage we are all doing to our planet, but it is often as guilty as anyone of wasting resources. The pandemic has forced us to rethink the ways we do things and the Vectar project is adopting methods to help productions to specifically address these issues.”

He continues: “Remote frame accurate, real time monitoring of films on our stages is a viable alternative to global travel. Building reusable virtual sets and digital location backdrops for use in greenscreen and LED XR studios is a viable alternative to building and scrapping sets and working on outdoor locations. It does require rethinking the production approach, however, climate destruction leaves us no choice. We can only change the world if we change our own world first. I truly hope at The Vectar Project we can be part of the solution.”

For more information on The Vectar Project and to book the studio, please visit: https://www.vectarproject.co.uk/

For further details on ‘Green Days’, in first instance, please email your film details to info@vectarproject.co.uk

Employment and unemployment both rise in the last three months