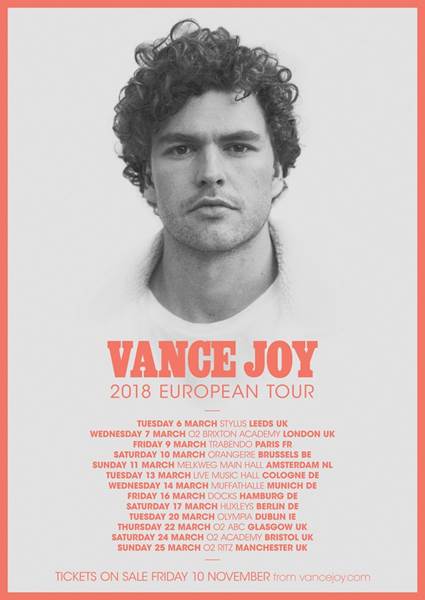 Australian singer-songwriter Vance Joy has today announced that he will be embarking on a headline European tour in March 2018. Tickets for the tour will go on general sale at 9am GMT on Friday the 10th of November (tickets: vancejoy.com).

Starting on March 6th in Leeds, the tour will see Vance play 13 dates all across Europe before concluding in Manchester on March 25th. Included in the run of dates is a show at London’s Brixton Academy on March 7th. This show was originally scheduled to take place at London’s Kentish Town Forum but was then upgraded to the near 5,000 capacity venue due to unprecedented demand.

On Thursday Vance released brand new track ‘Like Gold’, which is the second glimpse he has given fans of his forthcoming album. Vance had this to say about the plaintive new song,

“I wrote ‘Like Gold’ after coming off the road at the start of 2016. It started with a simple melody I was humming and the idea of looking back at a relationship.”

Along with releasing new music, Vance revealed that his upcoming album will be titled Nation Of Two and will be released in February 2018. On the title of the album, Vance had this to say:

“Nation Of Two describes a perfectly self-contained couple; their world beginning and ending at the bed they share, the car they ride in, or any other place where they’re together…the idea that their love for each other gives them their bearings; a point of reference that makes sense of life.”

Released in 2014, Joy’s debut album, dream your life away, spawned multiple hits including Fire and the Flood, Mess Is Mine, and the platinum selling single Riptide. Speaking of Riptide, the international smash hit song has sold over 1 million copies in the UK to date and has been streamed over half a billion times on Spotify alone.

Along with being hugely popular, the song received critical acclaim in the form of being awarded the grand prize by the prestigious International Songwriting Competition, the judges giving the song a perfect score. Riptide also caught Taylor Swift’s attention, who invited the singer to join her on the road as her main support on her 1989 World Tour, which saw Joy playing to over 2.2 million people across 85 dates.

A Taste of Honey Hosts Live Jazz Band at the Deli Tonight to Raise...

Rick Astley back with a new album and a Manchester Date