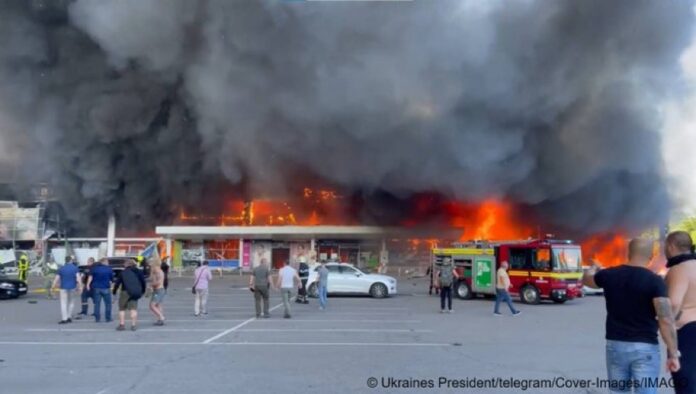 Serhii Kruk, who heads Ukraine’s State Emergency Service, reported on June 28 that 16 people were killed and 59 injured as a result of Russian missile attack on Kremenchuk shopping mall.

President Zelensky said in his address that a strike on a mall in the city of Kremenchuk was deliberate and is “one of the most daring terrorist acts in European history.”

Johnson said that Putin “must realize that his behavior will do nothing but strengthen the resolve of the UK and every other G7 country to stand by Ukraine for as long as it takes.”

President Biden said that Russia should be held accountable for attack on civilians at shopping mall.

“Russia’s attack on civilians at a shopping mall is cruel. We stand in solidarity with the Ukrainian people,” he said.

Biden reiterated that the U.S. and its allies stand with Ukraine and that Russia will be held accountable for such atrocities.

Meanwhile in a video address to G7 leaders, President Volodymyr Zelensky urged world leaders “to do their maximum” to end the war by year’s end, including by intensifying sanctions against Russia

Zelensky asked for anti-aircraft defense systems, heavier sanctions on Russia, and security guarantees according to reports and He also asked for help to export grain from Ukraine and for reconstruction aid

The Japanese Prime Minister Fumio Kishida on announced additional sanctions against Russia, including a ban on imports of Russian gold.

Japan will also expand its asset freeze measures to cover an additional 70 Russian individuals and organizations and will implement a ban on exports to 90 military-related entities.