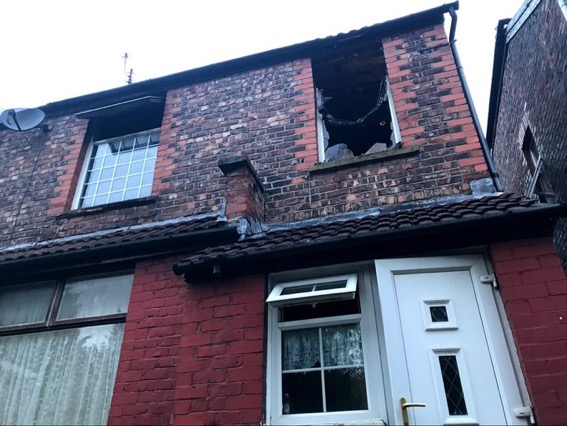 Firefighters from Greater Manchester Fire and Rescue Service (GMFRS) rescued two people from a serious house fire in Prestwich in the early hours of this morning.

Fire engines from Manchester Central, Whitefield, Broughton and Agecroft fire stations were called to a semi-detached house on Richmond Avenue at 3.30am.

While crews were en route, staff from North West Fire Control (NWFC) gave life-saving advice to a teenage girl who alerted emergency services to the fire by calling 999. NWFC call handlers provided fire survival guidance to the girl and stayed on the phone until GMFRS crews were able to reach the girl and a woman who were trapped in the house. A third person was out of the building before firefighters arrived to the scene.

The casualties were transferred to the care of colleagues from North West Ambulance Service before being taken to hospital.

Firefighters wearing breathing apparatus brought the fire under control using, two hose reels and a positive pressure ventilation fan, and crews remained at the scene throughout the morning.

GMFRS Area Manager, Ben Levy, said: “This incident could have been so much worse without the combination of the bravery of the teenager who called 999, the life-saving guidance of NWFC, and the skill and dedication of the firefighters who saved them.

“This is a timely reminder for people to have working smoke detectors on every level of their home to give them the best chance to escape if there is a fire. For advice please go to our website manchesterfire.gov.uk.”

The cause of the fire is currently under investigation.