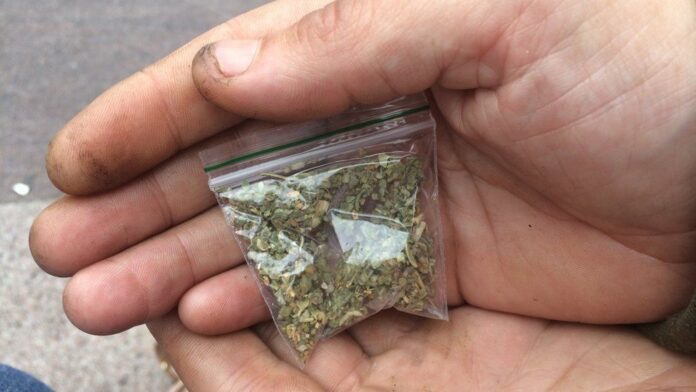 Hussain was sentenced to four years and 11 months after pleading guilty to conspiracy to supply class B drugs, importation of a psychoactive substance, and possession of class B drugs.

Townsend was given two years in custody after pleading guilty to conspiracy to supply class B drugs, possession of a firearm when prohibited, and possession of a section 5 firearm.

The pair’s convictions are the first as part of GMP’s dedicated operation to tackle the child criminal exploitation of vulnerable people to sell drugs in the city centre, particularly around Piccadilly Gardens.

Codenamed Operation Fairbank, the operation is a multi-agency response to an increase of underage people being exploited to supply drugs in the area, namely in the supply of spice.

The court heard how on the evening of Tuesday 24 March this year , a customs officer from Border Force examined a parcel from Shanghai, China, which was found to contain 60 grams of a brown substance – examined and found to be the class B drug known as ‘spice’.

While Hussain was named as the recipient of the package, a search warrant later executed at the intended address found that the occupier of the property was Townsend and officers arrested him for being concerned in the supply of class B drugs.

Hussain was later arrested after collaborative work between detectives and GMP’s drone unit, and was found to have quantities of ‘spice’ in his rucksack.

During interview in custody, Hussain declined to answer any questions in contrast to Townsend who made several admissions into the way the class B substance was imported from China and then dealt Manchester, but initially denied dealing himself.

As the interview proceeded, Townsend’s wrongdoing appeared to increasingly come more apparent to him and described himself as a ‘small person in a big pond’.

The pair were later charged and pleaded guilty to the offences they were accused with and will now spend six years and 11 months in custody between them.

Police Constable Andrew Beard, of GMP’s City of Manchester’s Challenger team, said: “We hope that these results will be the first of many as part of Operation Fairbank, which will continue to tackle the issues of exploiting vulnerable people with the dealing of ‘spice’ in Manchester.

“This drug not only has pernicious and significant consequences for those who take it, but it blights the lives of those who are drawn into the criminal enterprise of dealing it just as much and it is absolutely important that we bring those response for this to justice.

“Hussain and Townsend played important roles in the importation and dissemination of swathes of this drug to the most susceptible in society and this is a strong statement to those who are involved in similar criminal dealings that this is serious and we will treat it as such.”