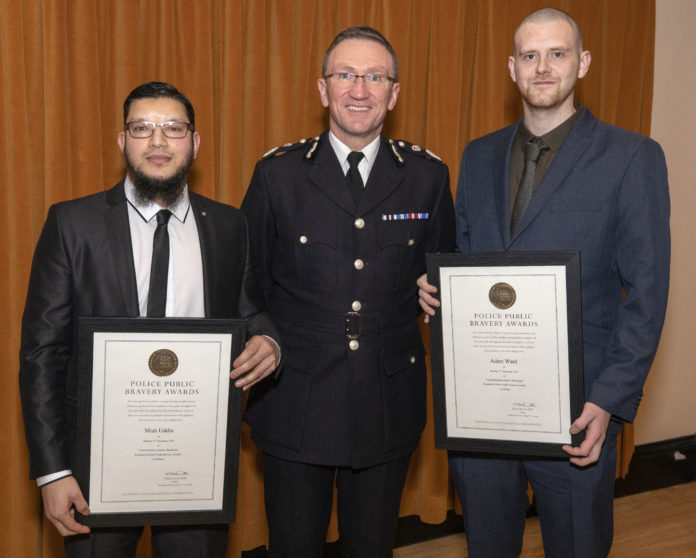 On 31 December 2018 at Victoria Station in Manchester, members of the public were making their way into the city to celebrate the New Year.

As the officers, along with Adam and Miah rushed towards the scene, they were confronted with a man – who was later identified as Mahdi Mohamud – wielding a knife. They could see that two passengers had already been attacked by the suspect.

They immediately confronted Mohamud where a struggle ensued, during which, 31-year-old Police Sergeant Lee Valentine was stabbed in the shoulder.

The attacker was very quickly detained by officers with the help of Adam and Miah and was arrested on suspicion of attempted murder.

On Tuesday 27 November 2019, Mahdi Mohamud was sentenced to life with a minimum of 11 years in prison on three counts of attempted murder and one count of possessing information likely to be useful to a person committing or preparing an act of terrorism.

The awards come after Adam and Miah, as well as the BTP officers, received Chief Constable’s commendations for their bravery back in 2019.

Chief Constable Ian Hopkins, who presented Adam and Miah with their awards, said: “Adam and Miah ran to support the BTP officers and assisted in detaining Mohamud, without regard for their own personal safety.

“Without their valuable assistance there could have been further or more life-threatening injuries and their actions can only be described as brave, selfless and highly commendable.

“As soon as they heard the screams they demonstrated extreme courage and assisted in bringing a horrific attack to an end within seconds.”

After receiving the award, Miah said: “On the night of the incident I didn’t think about what I was doing, I just instantly knew I needed to help.

“The officers were quickly on the scene and were great in keeping the gentleman under control until further support arrived.

“I really enjoyed the award ceremony; it was a proud night for me and my family.

“I would also like to thank Chief Constable Ian Hopkins, for presenting me with my award on the evening.”

Speaking about receiving his award, Adam said: “During the incident on New Year’s Eve, I just heard a scream and knew I had to try and help somehow; I ended up running towards the incident.

“I can only thank my colleague and fellow BTP officers for having the same reaction.The ceremony was great and was a good bit of final closure to what had happened on that night.”