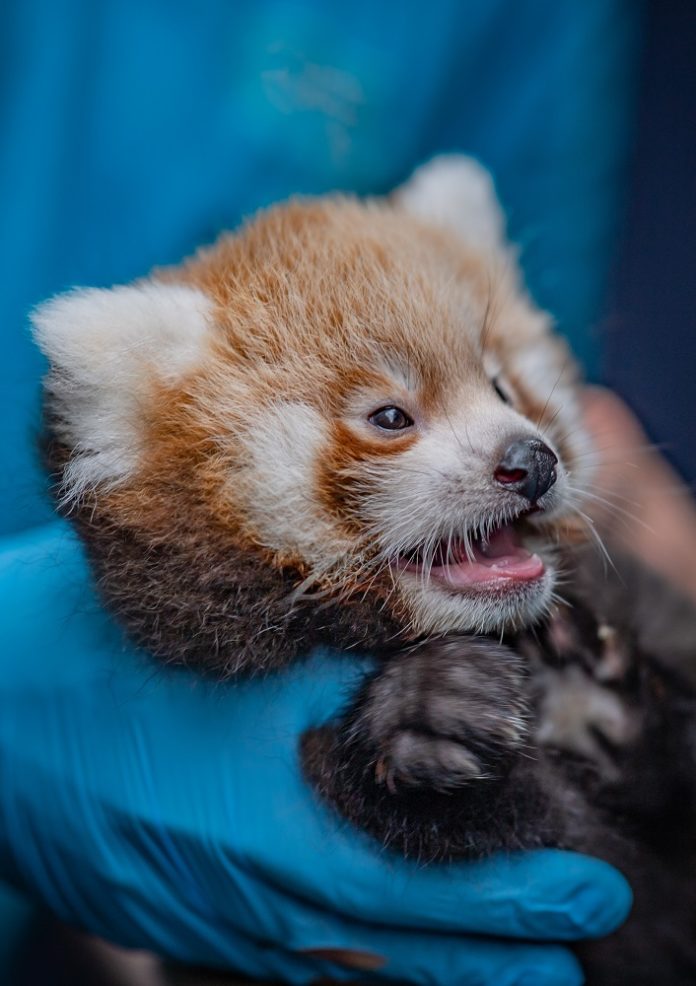 Chester Zoo’s newest arrivals – two adorable red panda cubs – have been revealed as a boy and a girl during their first ever health check-up.

The precious nine-week-old twins, classed by conservationists as endangered in the wild, were born on 22 June to mum Nima and dad Koda who have kept them tucked up in their nest boxes since birth.

Now, specialist vets and keepers have had their very first look at the delightful duo, examining the pair during the health check, where they were weighed, sexed and vaccinated.

Each of the fluffy youngsters was given a full, clean bill of health.

“These red panda twins are wonderful, important new additions to the carefully managed breeding programme for the species, which is working to increase the safety-net population in Europe as numbers in the wild continue to decline.

“Happily, both cubs are developing very well indeed and the health MOTs we’ve been able to perform confirmed that mum Nima is clearly doing a great job of caring for them.

“We also discovered the genders of each of the cubs – one male and one female – and returned them to their mum as soon as we’d finished giving them a quick once over. Nima took them straight back to her nest and it’ll be a few weeks now until the cubs start to develop the confidence to come out and explore by themselves. Before they’re able to stand on their own feet, it is though possible that some lucky people will have the occasional glimpse of Nima carrying them from nest to nest by the scruffs of their necks.”

Red pandas are found in the mountainous regions of Nepal, India, Bhutan, Myanmar and southern China where their wild number is estimated at fewer than 10,000 – a 40% decline over the past 50 years.

This decrease is a direct result of human actions, such as widespread habitat destruction, trapping for the illegal pet trade and poaching for their iconic red fur – which in some countries is used to make hats for newly-weds as a symbol of happy marriage.

Conservationists at Chester Zoo have called on the public help to fight the illegal wildlife trade that is driving species to extinction around the world. People can report any suspicious activity they may spot, online or on holiday, via the zoo’s online illegal wildlife trade reporting form: www.chesterzoo.org/illegalwildlifetrade

In recent years, Chester Zoo has been fighting for the future of the red panda, which is also known as the ‘fire fox’, through habitat-focused conservation projects in the Sichuan Mountains of China, where they can be found among the bamboo forests.