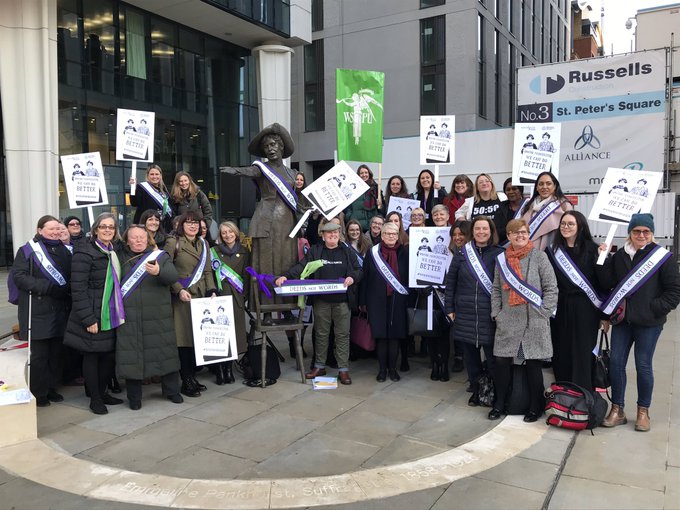 GM4Women2028 has announced the results of the Pankhurst-Fawcett Scorecard, which is tracking the progress of women’s equality in Greater Manchester against a set of indicators.

Twelve months on from its launch and the release of the first data, almost all the gaps remain and in many areas the situation for women in Greater Manchester is declining.

The Pankhurst-Fawcett Scorecard focuses on five themes: work, safety, participation, education and culture, within which it is measuring 10 different indicators. Some of the key findings of the 2018 v 2019 figures:

There has been no change in the number of women council leaders (18%) in Greater Manchester and on the GMCA Cabinet, as an indicator of participation. There is no easily accessible figure for judicial appointments across Greater Manchester, but the figure for the North West has increased from 29% to 31%.

The number of undergraduate engineering and technology students is used as an indicator for education, with the number of women participants down from 18% to 17%.  Construction apprenticeships have also fallen, from 2% to 1%.

Culture has been looked at in terms of the percentage of women holding the most senior executive and non-executive roles in the National Arts Council portfolio of galleries and museums.  The trend in Greater Manchester is positive with an increase from 40% to 45%.  Data for women participating in physical activity (less than 30 minutes a week) has decreased by 0.4% to 28%, which is also the case for men.

GM4Women2028’s work also highlights the lack of available data, particularly in the area of women’s safety.  As a result, the 2018 data was still the best representation to use for 2019.  GM4Women2028 is calling for the Violence Against Women GM Strategy to be finalised, and for GM4Women2028’s voice to be heard by GM leaders on this issue.

“Greater Manchester has long flown the flag for women’s rights. We’ve come a long way over the last 100 years since activists, including Manchester-born Emmeline Pankhurst, fought for the right for women to vote and equal pay for equal work but we are still a long way away from equal opportunity for women and girls.

“We need to do better. The momentum is now building and there’s a clear commitment from GM Leaders and other public, private and voluntary sector stakeholders to seeing a better future for the women of Greater Manchester.”

Like the suffragettes who boycotted the 1911 census as an act of civil disobedience, and in whose steps they follow, GM4Women2028 is data driven.  It will continue to call for clearer data and monitor this data so that a true picture of life for women in Greater Manchester is understood.