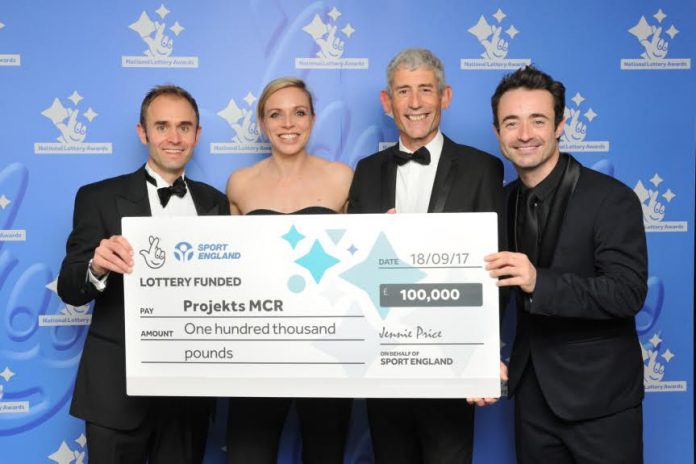 Projekts MCR received a huge surprise when Holby City actor and Strictly Come Dancing star Joe McFadden, revealed to the group that they are to receive a whopping £100,000 National Lottery grant.

Millions of viewers will witness the exciting moment which is being broadcast as part of the National Lottery Awards show on BBC One on Wednesday 27 September at 10.45pm.

The Manchester based project will use the funding from Sport England to improve their existing site, create a safe spectator space and develop a new café and event area.

The group were invited to London to attend the recording of the BBC One National Lottery Awards show, which celebrates the nation’s favourite Lottery-funded projects.

They were not aware that their funding application had been successful until Joe McFadden delivered the shock news in front of a star-studded audience which included Martin Kemp, Martin Clunes, Kimberley Walsh, Tamzin Outhwaite and double gold medal winning Paralympian Libby Clegg.

John Haines, chief officer at Projekts MCR, said: “We were absolutely blown away when Joe McFadden told us the news that we’d received our funding live on camera.  We had no idea that was the real reason we’d been asked to attend the event.

“Projekts MCR is aiming to create a space which welcomes, supports and appeals to children, their parents, core skaters and beginners. Our organisation strives to improve mental and physical well-being through activity and community development.  The funding will make a huge difference to the future of the project.”

Sports presenter and Strictly Come Dancing champion, Ore Oduba, is presenting the show for the first time.  He said: “It was brilliant to see the delight on the faces of the group when they were told they had received their National Lottery funding.

“National Lottery players raise £30 million every week for good causes which make a life-changing difference to communities right across the UK.

“The National Lottery Awards show shines a light on the work of these projects and the transformational power of Lottery funding.  Everyone who plays the National Lottery should be very proud of what they are helping to achieve.”

Sport England’s Director of Property Charles Johnston added: “Sport England was impressed by Projekts MCR’s vision to make the Skate Park a welcoming and exciting place for people in Manchester to get active – no matter their ability, age or background.

“We’ve awarded them a National Lottery grant so they can expand the skate park’s facilities, and provide a community hub featuring a city-style café and event space to support wider community engagement.

“The funding will increase the opportunities for casual sessions, group and individual skateboarding lessons, and social events for the benefit of everyone in the community.”