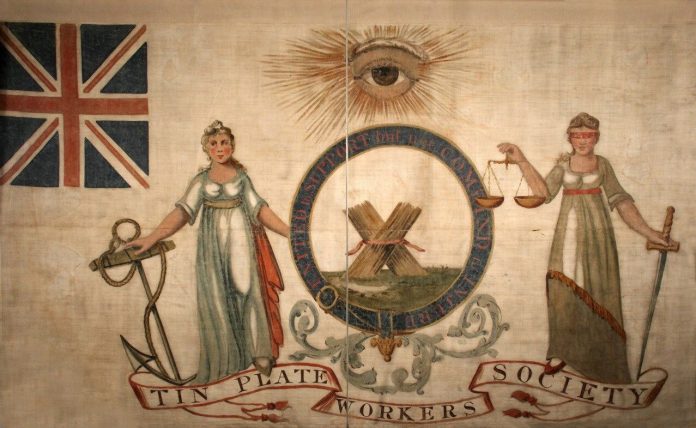 The Manchester Histories Festival (7-11 June) is to celebrate 150 years since the formation of the Trades Unions Congress with a TUC Day curated by Dave Haslam taking place on Friday 8 June.

The day will encompass a series of events and film screenings that will lead people on a journey through some of the key places and spaces across Manchester and Salford that were instrumental in the formation of the Trades Unions Congress in 1868, which brought together representatives of different trades to debate collective action, signifying a landmark moment in the history of British trade unionism and politics.

TUC Day is curated and led by DJ, writer and Manchester Histories creative consultant Dave Haslam, himself one of the figures behind Manchester’s radical spirit.

The events will be staggered throughout the day in diverse venues that collectively narrate the story from the Three Crowns Pub in Salford where the idea was first discussed, to the Mechanics Institute where the first official TUC meeting took place, to the People’s History Museum which is recognised as the national museum of democracy.

The day reaches its climax with an onstage interview between Dave Haslam and the current TUC general secretary, and its first female leader,Frances O’Grady, to shine a light on the present and future, as well as the past of the organisation.

Dave Haslam, curator of TUC Day for Manchester Histories Festival, comments: “It’s been fascinating to put together this programme of events to mark the forthcoming TUC anniversary as part of Manchester Histories Festival.  I’ve tried to create as varied an experience as possible, that unfolds to reveal the story behind the TUC including a visit to the site of Three Crowns pub on King Street in Salford, where the idea of that first congress was mooted some eighteen months earlier.

“I hope that the day gives us a chance to highlight the psychological and social cost of job insecurity in our current era, and ongoing issues, including equal pay, and the chance to debate how workers’ rights can be strengthened in 2018.”

The 5th Manchester Histories Festival takes place across Greater Manchester from 7-11 June 2018 with the themes of protest, democracy and freedom of speech, in part a reflection of the incredible historical significance of 2018 which also sees the 100th anniversary of The Representation of the People’s Act, when some women obtained the right to vote for the first time.

This unique festival offers a packed long-weekender of histories to be discovered through music, film, debate, talks, theatre, performance, walking tours, arts and much more. Alongside TUC Day it also includes the Manchester Histories Celebration & Fun Day (10 June), which this year will take place in Manchester Central Library.

TUC Day Events taking place on Friday 8 June are listed below.  People can take part in the whole day or pick out individual events to attend.

Celebrating 150 years of the TUC and looking at the continuing need for unions now. Join staff from the WCML for a guided tour of the exhibition and the Library’s extensive trade union archives.

Discover Salford’s radical history with Hayley Flynn including Bexley Square, and the site of the Three Crowns pub, where the initial ideas for a congress were discussed.

The People’s History Museum in Manchester is the national museum of democracy. Trace the historical development of trade unions through its unique collection.

The North West Film Archive presents a selection of archive news footage from BBC news (many not shown in public since they were first broadcast), including footage from the 1981 People’s March for Jobs.

Join Dr Jo Grady, Senior Lecturer in Employment Relations at the University of Sheffield, for a short discussion on the lessons from the past that can help trade unions meet current and future challenges.

Steve Baguley, a retired National Officer of the Communication Workers Union, presents his extensive collection of union badges and explains their role in trade union history.

Established to provide opportunities for the working classes to study scientific theory and enjoy concerts, exhibitions and library facilities, in 1868 the Mechanics Institute was the site of the inaugural meeting of the Trades Union Congress.

Profiling two key figures in the Trade Union movement; Hugh Scanlon, former shop steward at Metropolitan-Vickers in Trafford Park, and Granville Lawrence campaigner for the rights of the Black workers.

DJ/writer Dave Haslam interviews the TUC’s General Secretary, Frances O’Grady, on stage at the Friends Meeting House. In addition to insights into Frances O’Grady’s personal story, expect discussion on the role of trades unions in a contemporary landscape of zero hours, job insecurity, Brexit, deregulation, and the gig economy. There will also be an opportunity for questions from the audience.

The full Manchester Histories Festival 2018 programme can be seen at: www.manchesterhistories.co.uk