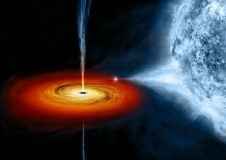 An international team of astronomers including a Manchester based researcher have discovered three closely orbiting supermassive black holes in a galaxy more than 4 billion light years away.

Most galaxies have just one black hole, usually with a mass of between 1 million and 10 billion times that of the Sun, at their centre. The discovery of a trio of black holes, the tightest trio ever found, suggests that such closely packed supermassive black holes are far more common than previously thought.

The team, which included Dr Keith Grainge, from the University of Manchester’s School of Physics and Astronomy, performed VLBI (Very Long Baseline Interferometry) observations with radio telescopes at a number of frequencies to discover the inner two black holes of the triple system.

The technique combines the signals from large radio antennas separated by up to 10,000km to see details 50 times finer than that possible with the Hubble Space Telescope.

Dr Grainge said: “This exciting discovery perfectly illustrates the power of the VLBI technique, whose exquisite sharpness of view allows us to see deep into the hearts of distant galaxies. The next generation radio observatory , the Square Kilometre Array, is being designed with VLBI capabilities very much in mind.”

Galaxies are believed to evolve through merging and so that should lead to multiple supermassive black holes in some of those galaxies at a given time. The source under investigation, a quasar, was found in the Sloane Digital Sky Survey (SDSS).

Lead author Roger Deane, from Cape Town University, South Africa, said: “What remains extraordinary to me is that these black holes, which are at the very extreme of Einstein’s Theory of General Relativity, are orbiting one another at 300 times the speed of sound on Earth. Not only that, but using the combined signals from radio telescopes on four continents we are able to observe this exotic system one third of the way across the Universe.”

Such systems are important to understand for several reasons: in terms of galaxy evolution it is known that black holes influence how galaxies evolve, and understanding how often black holes themselves merge is key to this work. Furthermore, if General Relativity is correct, closely orbiting systems such as this are sources of gravitational waves in the Universe.

Future radio telescopes such as the Square Kilometre Array (SKA) will be able to measure the gravitational waves from such systems as their orbits decrease. At this point, very little is actually known about black hole systems that are so close to one another that they emit detectable gravitational waves.

While the VLBI technique was essential to discover the inner two black holes (which are in fact the second closest pair of supermassive black holes known), Deane and co-authors have also shown that the binary black hole presence can be revealed by much larger scale features.

The orbital motion of the black hole is imprinted on to its large jets, twisting them into a helical or corkscrew-like shape. So even though black holes may be so close together that our telescopes can’t tell them apart, their twisted jets may provide easy-to-find pointers to them, much like using a flare to mark your location at sea.
This may provide a way for sensitive future telescopes like MeerKAT and the SKA to find binary black holes with much greater efficiency.

“We have found the first needle in the ‘middle age’ Universe and I hope that we will find much more and even closer systems of that kind in the near future,” added Hans-Rainer Klöckner from the Max Planck Institute for Radio Astronomy, a co-author of the paper.

“Such close-binaries will not only show us how supermassive black holes could grow or how they could alter our space time, they will also help us to understand the inner workings and the interplay between jets and the accretion disc surrounding black holes.”