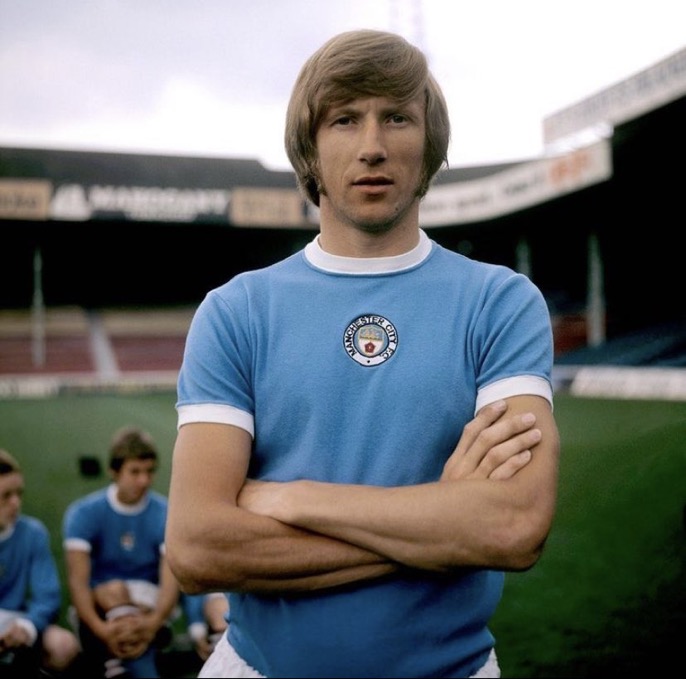 Tributes have been paid tonight to the England and Manchester City midfielder Colin Bell, who has died aged 74 following a short illness.

He also won the FA Cup, League Cup and the European Cup Winners’ Cup at City during the club’s most successful period until their recent title successes.

A huge favourite with City fans, Bell was nicknamed Nijinsky after the thoroughbred race horse in a tribute to his stamina.

“He was such a great, great player and he was a phenomenal athlete alongside being a phenomenal footballer,” said former City goalkeeper Joe Corrigan.

Bell was capped 48 times by England and featured in the 1970 World Cup. He would have made more international appearances but suffered a serious knee injury in 1975, aged 29.

“Colin was a lovely, humble man. He was a huge star for Manchester City but you would never have known it,” said his former City team mate Mike Summerbee.

Colin Bell will always be remembered as one of Manchester City’s greatest players and the very sad news today of his passing will affect everybody connected to our club,” said City chairman Khaldoon Al Mubarak in a statement.

“Colin was incredibly humble and a modest and understated man with an obvious inner strength of character. Our Club has lost a true great.”

”He was to Manchester City what George Best was to Manchester United – the golden boy, the untouchable, the prodigal son. As the years ticked by, Bell’s influence seemed to grow even stronger rather than fade and while the press and pundits harshly claimed Rodney Marsh’s signing cost City the 1971/72 league title, few noted that Colin Bell had missed nine games through injury and that City won just four of those matches.” said a tribute on the club’s website

“He was a very special person, not only as a footballer but as a man – he was just tops and I can’t believe he’s gone.

“He is irreplaceable. We had some great times together and I’ll miss him terribly.

“It’s an awful shock and it has hit me very hard, I can promise you.”

Stockport’s Will Mellor launches Nationwide Together we will campaign