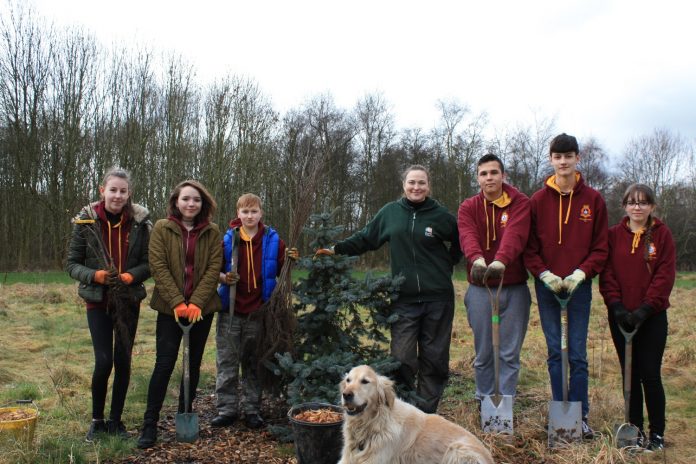 The new trees have been planted at Parkway Playing Fields, Manchester on Sunday 4 February 2018, extending existing woodland creating a haven for both people and wildlife.

For the initiative the Air Corps teamed up with leading environmental charity City of Trees who have pledged to plant 3 million trees – one for every man, woman and child in Greater Manchester, over the next generation.

Greater Manchester Wing is one of the 33 Wings in the Royal Air Force Air Cadets whose HQ is at RAF Cranwell.

The tree planting is ahead of the centenary of the Royal Air Force, which celebrates its 100th birthday on 1 April 2018 with a series of special events and activities across the country.

This year also marks 76 years of the Air Training Corps and the planting is a culmination of events held throughout 2016/17 celebrating the achievements of the organisation.

300 new trees took root including oak, silver birch, field maple and cherry, all which have strong links to the ethos of the Air Corps, with some being traditionally used in the making of aircraft.

Greater Manchester Wing Commander David Archibald comments; “The aim of the Air Corps is to promote young people to be good citizens within the community so we felt it fitting to support City of Trees’ mission to plant a tree for every, man, woman and child in the City region.”

He adds; “We hope that the trees will be a lasting legacy to the Greater Manchester Wing and the local environment”.

Beth Kelsall from the City of Trees comments; “These new trees are not only a great way to mark an important point in the Air Training Corps and RAF history, but will help to combat climate change and boost biodiversity.”

She adds; “The trees have given the area a new lease of life and will benefit local people and the environment for generations to come.”

GM Wing has 37 Squadrons around the M60 – to the north Bury, to the east Oldham, to the south Macclesfield and the west Warrington. There are some 1300 cadets with just under 400 rank ranging adult volunteers, Commissioned Officers, SNCO, and Civilian Instructors, supported by around 200 Civilian Committee members and Padres.