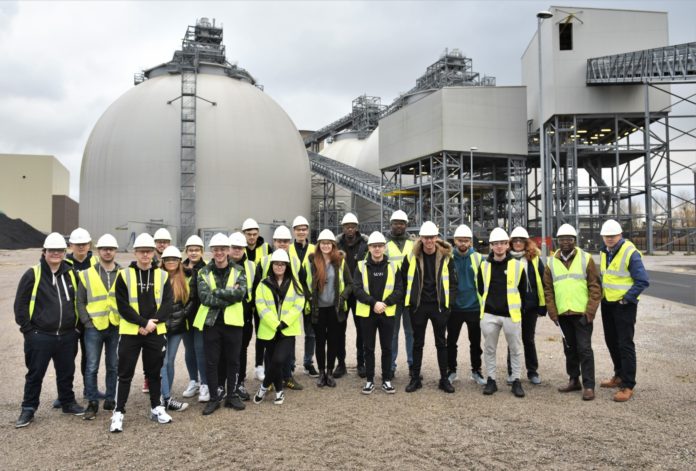 Students from Trafford College have visited Drax Power Station as part of their science studies to understand how renewable electricity is generated by Europe’s biggest carbon saving project.

The group of 23 students aged between 18 and 25, visited Drax Power Station, near Selby in North Yorkshire, which has upgraded two thirds of its generating capacity to use compressed wood pellets in place of coal.

It has also paved the way for Drax to pioneer ground-breaking bio energy with carbon capture and storage (BECCS) technology. If BECCS can be used across all four of its biomass generating units, Drax could become the world’s first negative emissions power station, helping it to make an even greater contribution towards tackling the climate emergency.

Pupils were taken on a full tour of the site including the innovative BECCS pilot plant which is capturing a tonne of CO2 each day, the 427-metre turbine hall that houses the six huge turbines which power the generators to produce electricity.

They also enjoyed a close-up view of the UK’s first wood pellet storage domes, each large enough to fit The Royal Albert Hall inside, and the 12 cooling towers, which at 115 metres high are taller than the Statue of Liberty.

Drax Group’s Head of Business Sustainability, Vicky Bullivant, said: “By providing tours at Drax Power Station we want to further students’ understanding of how electricity is produced and hopefully fire their imaginations and inspire them to study STEM subjects by showing them some of the pioneering technologies we’re trying, like BECCS, which could play a vital role in addressing the climate crisis.”

During the tour, pupils learnt how renewable electricity is generated and discovered how sustainable, compressed wood pellets have enabled Drax to reduce its carbon emissions by more than 80% compared to when those generating units used coal.

Bertin Speaks, from Trafford College, who organised the visit, said: “The students had a great day at Drax, learning about how the electricity system works and where our electricity is generated. Visits like this are so valuable because seeing the power station and the scale of the operations is impossible to replicate in a classroom – it really brings the subject to life.”

Drax has a long tradition of supporting education and helping to inspire the engineers of the future by encouraging greater interest in STEM (science, technology, engineering and maths) subjects. Last year it invested £35,000 in the GreenPower initiative involving seven local schools and colleges in building and racing electric vehicles.

The Trafford College students are among over 12,000 visitors to Drax every year. Tours are free to all primary and secondary schools and can be tailored to suit the area of the curriculum teachers are interested in.