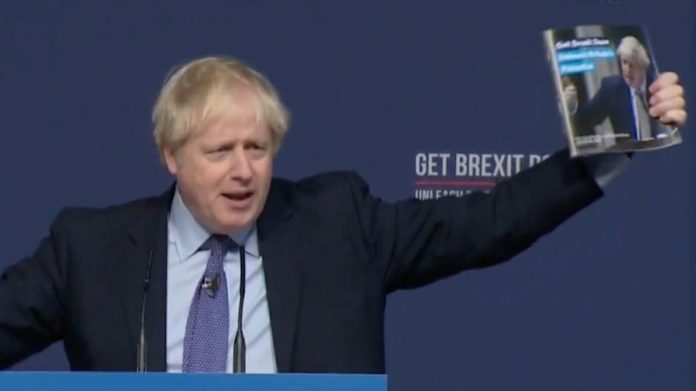 Prime Minister Boris Johnson launched the Conservative Party manifesto in Telford today and pledged to bring his Brexit deal back to parliament before Christmas if he wins a majority.

The Manifesto promises party a “triple tax lock” ensuring that income tax, national insurance and VAT do not rise under a Conservative government.

Jonhson says if the party is “lucky enough” to get a majority, then there is a Brexit deal “ready to go”. “Just add water,” he jokes.

“We can then get the whole thing completed in a matter of days if not weeks and we’re out by January 31.”

“In this manifesto there is a vision for the future of this country in which we unite our amazing country and level up across the country.”

“We believe that after three and a half years of being held back by a broken Parliament it is time to unleash the potential of the whole country and to forge a new Britain.”

Meanwhile Chancellor Sajid Javid told Sky’s Sophy Ridge that the Tories would set out “the most detailed, most transparent costings that has ever been published in British electoral history,” and later in a BBC interview said he “does not accept for a minute” that the government’s Brexit deal would lead to a slowdown in the U.K. economy.

“There’s been no government forecast of the deal that we’ve reached with the EU,”

“This is the billionaires’ manifesto.
They bought it. You’ll pay for it.”

Two taps on your smartphone for a taxi arrives in Manchester