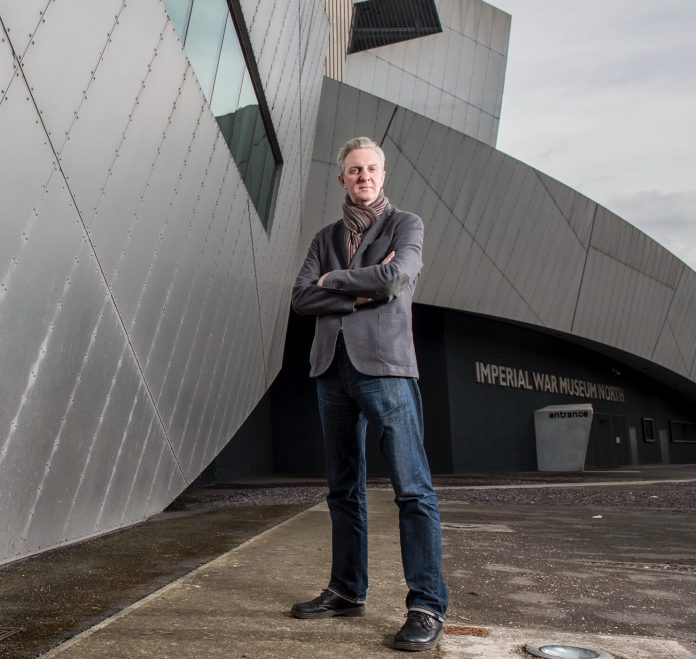 From 27 July 2018 until 24 February 2019, visitors to IWM North will be able to hear the powerful poetry of Tony Walsh alongside imagery from IWM’s collections spanning one hundred years.

Complementing Making a New World, a major season of exhibitions and events at IWM North that coincide with the final year of the First World War Centenary, the acclaimed Mancunian poet Tony Walsh has written and recorded a new poem specially for the Big Picture Show at IWM North. Commissioned by Imperial War Museums (IWM), the new poem, Mightier Than War (2018), explores the triumph of the human spirit in times of conflict.

The poem begins by asking visitors to imagine the individual experience of war, scenes of conflict and the feeling of displacement, drawing on the historic and contemporary: “Imagine all those faces from the history books, the news; imagine for one moment that you’re standing in their shoes. Imagine having hopes and dreams, then everything goes wrong; and everything you want to be – reduced to just – be strong.”

Following the descent into war, Walsh looks to the future: “So imagine if we stop and look the future in the face. Do we want to win at war enough to lose the human race?”

Mightier Than War (2018) will be presented for the first time at IWM North as part of the Big Picture Show, an immersive surround sound and 360 degree projection that brings personal experiences of conflict to life. Accompanied by historic film footage and photographs from IWM’s extensive collections, HD projections onto the 27-foot-high walls of the museum’s Main Exhibition Space will immerse visitors in a complete sensory experience.

The Manchester born poet Tony Walsh came to worldwide attention in May 2017 when his poem, This Is The Place (2013), was broadcast from the vigil for victims of the bomb attack at the Manchester Arena. Tony was elected as a Fellow of the Royal Society of Arts (FRSA) in 2016 and was Poet in Residence for Glastonbury Festival in 2011.

Tony Walsh says: “To write and record a poem to feature in the Big Picture Show at IWM North is a real honour. I’ve written what aims to be a powerful poem about the triumph of the human spirit in times of conflict; a poem which uses history and current events to ask the hard questions about our collective future. I’m excited to see it brought to life with incredible sounds and visuals from the museum’s remarkable collection. The project is sure to remain a career highlight for me and one which we hope will remain as a memorable and thought-provoking experience for all who see and hear it. ”

The Big Picture Show and Tony Walsh’s Mightier Than War (2018) are part of Making a New World, a season of innovative exhibitions, installations and immersive experiences taking place across IWM London and IWM North between 27 July 2018 and 31 March 2019. The free season will explore themes of remembrance and how the First World War has shaped the society we live in today.